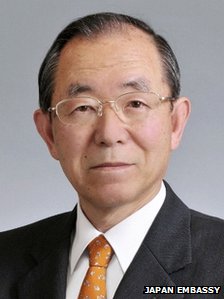 An assailant has snapped the flag off the car of Japan's envoy to Beijing, amid high tension between the nations.

Japanese officials said two cars forced ambassador Uichiro Niwa's vehicle to stop before a man jumped out and snapped off the flag.


On Monday Japanese officials said two cars forced ambassador Uichiro Niwa's vehicle to stop before a man jumped out and snapped off the flag. Mr Niwa was not hurt. China's Xinhua news agency quoted the foreign ministry as saying it was committed to protecting "the safety of foreign embassies and personnel".


The two nations are locked in a bitter row over a small group of islands they both claim in the East China Sea. The issue has led to the most widespread anti-Japanese protests in years. Analysts say such protests could not happen without tacit consent from Beijing. China and Japan both claim sovereignty over the island grouping, called Senkaku in Japan and Diaoyu in China. Japan administers the islands, but China says the rocky grouping has been part of Chinese territory since ancient times. The disputed islands lie on a vital shipping lane and are surrounded by deposits of gas.


Japan's embassy issued the first account of the attack on Mr Niwa's car, saying his car was forced to stop and was then attacked. But Japan's foreign ministry later played down the incident, claiming that his car had been caught in traffic, and that the word attack was too strong. Chinese state media have not reported the incident, but Japan's Kyodo news agency quoted a Chinese foreign ministry official as expressing regret.

Pro-China activists and Japanese nationalist groups have both landed on the islands in recent weeks, pushing the issue to the top of the political agenda.

In recent weeks thousands of people have taken to the streets in Shenzhen, Guangzhou and a number of other cities demanding that Japan leave the islands. In the south-eastern city of Shenzhen, a Japanese-branded police car was overturned and smashed with a metal bar. Protesters waved Chinese flags, burned images of the Japanese flag and shouted slogans denouncing Japan's claims over the islands.

The latest flare-up in tensions was sparked when the nationalist governor of Tokyo suggested his authorities could buy the islands from their private owner. On Monday the Japanese government turned down a request by the local authorities in Tokyo to send surveyors to the islands. Foreign Minister Koichiro Gemba said Tokyo wanted a police investigation into the case. Japan is also set to send a letter to Chinese President Hu Jintao, local reports said. Mr Gemba said it was key to "exchange opinions now" on ties.

China is ''seriously investigating'' the flag incident, state media said. Relations between the two nations have been tense amid a row over disputed islands in the East China Sea.

"This is very regrettable - the national flag shows a country's dignity and it is a principle of international law that you must respect it," Mr Gemba said. "We have strongly requested for a police investigation and the prevention of a recurrence of this incident." Senior Vice-Foreign Minister Tsuyoshi Yamaguchi is expected to leave later in the day to deliver the letter to Beijing, Japanese media said. Kyodo news agency, citing officials, said it would call for better ties.

Late on Monday, the US said it was concerned about the tensions between China and Japan. "We have regularly... urged these two countries to work this out peacefully," state department spokeswoman Victoria Nuland said.

Because doing these things would TOTALLY help your case China *pro-activists...c'mon, seriously? -_-'''