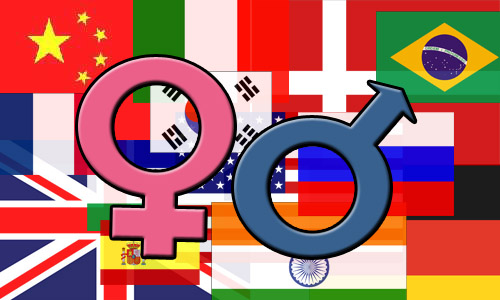 A lot of people have romantic fantasies of hooking up with someone from another country.  Yet there are rare opportunities for the mystery and novelty of such a relationship for most people.  That shouldn’t stop us from dreaming of it though.

The folks at MyNavi set up a survey asking men and women what country besides Japan they’d go in search of a girlfriend or boyfriend.  Based on this survey here are the top 5 countries for both Japanese men and women and reasons for their choices.

It’s good to see that recent political tensions haven’t lowered guys’ opinions of South Korean women.  It would seem that most of the guys were appreciating the similarities between their cultures. But one 54 year-old respondent gave the reason that most guys were probably thinking: “I’m a big fan of Korean dramas.”

Many American guys might not be happy with a 5th place ranking, but it’s that drive and optimism that women seem to like about them. The other popular reason to buy American was that they’re a good study tool for English, which might irk some English men out there.  Fret not lads, you’ll get your comeuppance later.

Some respondents like that English women seem to have character and a rather dignified image.  However, considering that most respondents included the Olympics in their reasons, their impression of British women may have been skewed by gymnasts and swimmers.

While Japanese women consider French men to have a gentlemanly character and a deep mind, it seems that it’s the language that whips them into a frenzy the most.  That French accent is a deadly weapon that gives their guys an advantage over the rest of us.

It seems that the Japanese men’s reasons for choosing American women echoed the women’s.  “It’s a good way to improve my English” was the most common reason, but their “bright and cheery attitude” was also a big selling point.

Granted Germany doesn’t have the romantic character that other European countries enjoy, but for many women that can be a good thing.  A lot of women appreciate the German stereotype of being “very serious and reliable” which was their most popular reason. Japanese women also see a lot of similarities between German culture and their own.

While a lot of western guys tend to go for a nicely tanned body, Japanese men put more value on fish belly white skin.  This shouldn’t come as a shock for anyone who’s seen a geisha before.  It’s perhaps the one country where, “you look pale” is a compliment.

Many women were taken by Italian men’s sense of style, but an equally popular response was actually that the way they treat women was great. I’m guessing they didn’t get that impression reading about Berlusconi.

Another very popular reason for choosing an Italian boyfriend was that the women love Italian food.  I don’t quite get what one has to do with the other though.

The ladies of France have won the hearts of Japanese men.  The most popular reason was French women’s killer combination of “beauty and sophistication.” However, another major point of attraction for Japanese men was the French culture’s overall appreciation of Japanese culture that runs from manga and anime to shogi and kendama.

Here’s a lesson to guys out there.  The men of England won the day here, and the reason was quite simple.  The overwhelming reason that Japanese women would venture to the UK for man is – chivalry.  More than looks, status, or other parts of their character it was simply a “ladies first” attitude that made this nation the most popular.

That’s not to say that they weren’t thinking about David Beckham too.

While those are the top five, going by the numbers it’s safe to say that (with perhaps the exception of the UK to Japanese women) no country has the lion’s share of eligible bachelors and bachelorettes.  Every country has something unique to offer and ranking them is pretty much and apples and oranges game that should only be considered with a light heart.

By the way, the variety of countries submitted by men was really wide. Some other honorable mentions were China “because they don’t get flabby in old age” as one respondent said.  A lot of eastern European countries such as Poland, Belarus, and Ukraine were chosen with beauty as the top reason.

Although they weren’t in the top 5, South Korea also scored well with Japanese women.  Looks were definitely a strong point but Korean men were also appreciated for their respect for their parents.

I was expecting the men to only choose countries within East Asian and South East Asian, ngl.