Japan to buy islands at center of dispute with China for Y2.05 bil 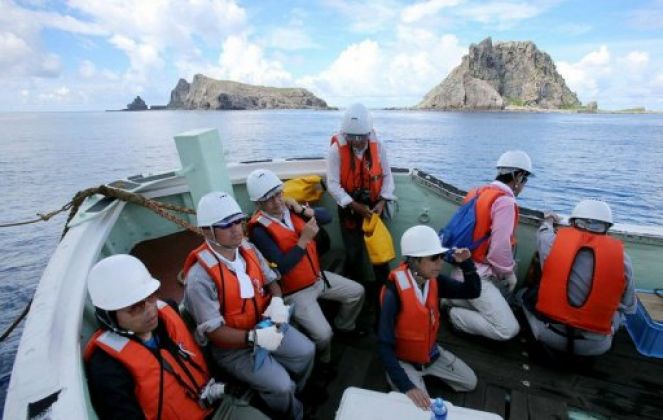 THIS PICTURE TAKEN ON SEPTEMBER 2ND, SHOWS A TEAM OF JAPANESE SURVEYORS ON A RUBBER BOAT NEAR THE DISPUTED ISLAND CHAIN

TOKYO — The Japanese government has agreed to buy a group of islands in the East China Sea at the center of a territorial dispute with China, a move likely to irk Beijing, Japanese dailies said Wednesday.

The central government will soon sign a contract to buy the islands claimed by both countries, known in Japan as Senkaku and in China as Diaoyu, for 2.05 billion yen ($26 million) from their Japanese landowners, the Yomiuri Shimbun said, quoting government sources.


Deputy Chief Cabinet secretary Hiroyuki Nagahama met the landowners on Monday and struck the deal to buy three major islands in the chain, including Uotsurijima, the largest island, Yomiuri said. Government officials were not immediately available to confirm the reports.

Prime Minister Yoshihiko Noda’s cabinet would soon confirm the nationalization of the islands and allocate reserve funds for the purchase, the Asahi Shimbun reported. Noda plans to formally inform the Chinese about the move on the sidelines of the U.N. assembly meeting later this month, the Asahi said, but a Japan-China summit has not yet been set.

The move is aimed at underscoring Japan’s control of the islands, “but China, which has opposed the nationalization plan, will for sure step up criticism if the cabinet decides on the purchase,” the Asahi added.

Tokyo’s outspoken nationalist Gov Shintaro Ishihara earlier this year unveiled a plan to buy the islands for the metropolis. He charges that the country is not doing enough to protect its territory and had said he wanted to develop the chain.

Testy Japan-China ties took a turn for the worse in August after pro-Beijing activists landed on one of the islands, which are controlled by Japan. They were arrested by Japanese authorities and deported.

About a dozen Japanese nationalists raised their country’s flag on the island days later, prompting protests in cities across China. The car of the Japanese ambassador was targeted in Beijing when an unidentified man ripped the national flag off the vehicle.

The government has already told Ishihara of its plan to nationalize the islands. At the weekend Ishihara had dispatched a survey team to waters close to the islands, ostensibly to look at the possibility of building a harbor there if his purchase plan were successful. The government has no plans for any construction on the archipelago in an effort to avoid further friction with China and Taiwan, which also claims the islands, the Asahi said.