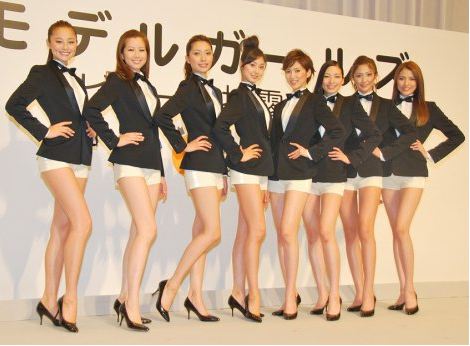 As reported previously, Model Girls is a new female unit from agency Oscar Promotion and is made up of eight ladies averaging a height of 175cm (5 ft 9). It’s been announced that the group will debut on October 24th with single “ROCK STAR”. The ladies held an open recording event in Tokyo on the 6th and performed for the press in their colorful and sexy outfits.

Along with its release in Japan, the single will also be available in the US and 20 other countries. In response to this, member Obana Kie remarked, “I’m very happy that we are fulfilling one of our dreams of expanding our activities internationally”.

Model Girls members were bathed in camera flashes from the press as they finished their performance. The members commented, “Despite the nerves, we are happy to have had fun singing and performing,” “With all these cameras flashing, I get the realization that we are really going to have our CD debut.”

Member Tomabechi Reina expressed confidence in the single, saying, “The content of the lyrics fits us to a T.” Leader Nakamura Sakura loudly proclaimed the unit’s goal is to “get to Tokyo Dome and Kohaku.” In reference to AKB48’s recently concluded 3-day concert at Tokyo Dome, she added, “Because of our height, we might seem intimidating compared to a lovely group like AKB48. But gentlemen please give us your support!”

Model girls will also be holding a live event at the Diver City Tokyo Plaza on September 22nd.