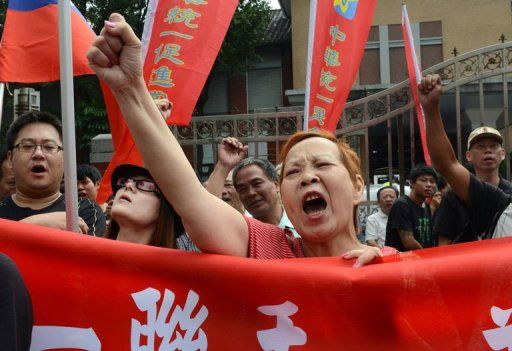 More than 100 Taiwanese activists burnt a Japanese flag in a protest in downtown Taipei Tuesday, as anger over disputed islands in the East China Sea spilled over from China.

The demonstration outside Taiwan’s parliament took place as a row over the islands—known as Diaoyu in Chinese and Senkaku in Japanese—prompted thousands to hit the streets in major cities on the Chinese mainland.

“When our compatriots in the mainland are striving to protect the Diaoyu islands, we people in Taiwan cannot remain silent,” said a spokesman for the small Union Party, the organizer of the protest.

The Taiwanese protesters called for cooperation with China to get back the disputed islands, which they said were “stolen” by Japan, and blamed the United States for Tokyo.

“The Americans should stop throwing their weight behind Japan, and the Japanese would back away,” said the Union Party spokesman, who declined to give his name.

Taiwan’s President Ma Ying-jeou has said Taipei has no intention to work with Beijing, mindful that doing so could hurt the island’s ties with Japan.

Tensions mounted after Japan announced last week it had completed a planned purchase of some of the islands, prompting Taiwan to recall its envoy to Tokyo and triggering mass protests in China.

The islands lie on vital shipping lanes and are believed to be located near potentially rich gas fields.