On September 21st, it was announced that actor Kitamura Kazuki is going to star as a ruthless killer in the upcoming Japanese-Indonesian movie ‘KILLERS‘.

‘KILLERS’ is set in Tokyo and Jakarta, focusing on a group of killers who got to know each other through the Internet. Kitamura is playing one of the Japanese killers named ‘Nomura’. He and his fellow Japanese co-star Takanashi Rin had to perfect their English prior to the filming, since this is going to be the main language used throughout the movie.

Kitamura stated, “This movie is aimed towards a global audience and should not only be anticipated by Japanese moviegoers but also by the people abroad. I can’t wait for it to be completed.”

The movie is produced by Chiba Yoshinori (‘Cold Fish’, ‘Koi no Tsumi’) and Gareth Evans (‘The Raid: Redemption’). The directors are the highly praised Mo Brothers (Timothy Tjahjanto and Kimo Stamboel), who made a name for themselves internationally with their splatter fest ‘Macabre‘ (aka ‘Rumah Dara‘).

Filming already began in Tokyo at the end of August and is expected to last until the end of October. Kitamura’s first impression of the script: “To be honest, it depicts a world that is hard to believe and at first I wasn’t able to comprehend what’s going on.”

He continued, “When I checked the directors’ profile and their past works, I could see that they have a great talent for creating powerful images. I’m sure that this is going to become a high quality work if it’s them and during our meetings I was also able to understand where they want to go with this movie.”

The protagonist, Nomura is a calm and confident man who only looks at other people as his possible next targets. As usual after another successful violent murder of a woman, he uploads his latest achievement onto the Internet to praise himself. In Jakarta, the journalist Bayu stumbles across Nomura’s online legacy. Seeing all those clips that have already been watched by millions of people makes him feel utterly disgusted, but at the same time he cannot deny the fascination that is taking over himself with every new clip.

One night he has to defend himself against a robber and ends up killing his first person himself. Just like Nomura, he uploads a clip of the robber’s final moments onto the Internet. After seeing this clip, Nomura feels strangely connected to Bayu and gets in contact with him over the Internet. Bayu doesn’t stop there and continues to kill and to upload, which gains him an increasing number of followers. Nomura can feel his ego wounded as his copycat is becoming more of a serious rival and gradually starts to lose his composure…

Kitamura explained, “He neither kills for a reason nor for his own desire nor justice. Maybe ‘executions’ would be a better way to describe it than murders. They are just inhuman acts. ‘Executions’ rather than murder. Personally there is nothing about Nomura that I can sympathy with, but as an actor you want to tackle as many different roles as possible. This one is certainly a role I’d love to try out. I have enough time to think about the pros and cons once it’s done. (laughs)”

Takanishi, who can currently be seen in the movie ‘Like Someone In Love‘, is playing a woman named ‘Hisae’. She is the only woman that isn’t just another target for Nomura and actually is able to discover a heart behind his tough facade.

She revealed, “Whenever Kitamura and I speak in Japanese with each other, we always try to come up with the appropriate Japanese translations for our English lines, read it out and compare them. It helps a lot to add the right kind of emotions to each line.”

Director Timothy Tjahjanto commented, “Of course the language barrier is an obstacle, but Kitamura and Takanishi easily are able to overcome that obstacle by giving their characters charm and a lot of depth in their own way.” He added, “Especially Kitamura and his fine facial expressions and movements are giving his role much more character than is written in the script. Takanishi, on other hand, is like my personal Lady Luck. It’s unbelievable how much purity and innocence she is able to give this movie. I’m sure she’s going to have a wonderful future as an actress.”

‘KILLERS’ is slated for a worldwide release sometime in 2014. 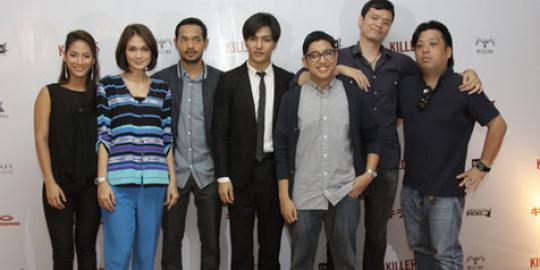 Never heard about this movie before O.o Takahashi Rin is one of my fav actress. Daniel Mananta is an Executive Producer,Oka Antara as Bayu,Luna Maya,Ray Sahetapy,and Tara Basro join the movie too... Oh my oh my too excited ><.