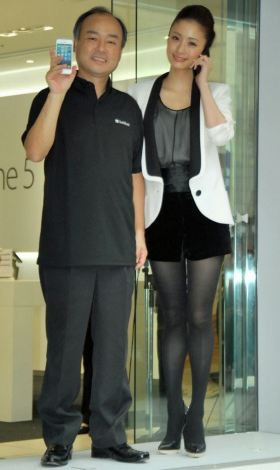 On September 21st, actress Ueto Aya attended a release ceremony for Apple’s new iPhone 5 at a Softbank store in Ginza.

This marked Ueto’s first public appearance after getting married to EXILE’s HIRO on her birthday, September 14th. In response to Softbank president Son Masayoshi’s blessings, the actress said with a smile, “Thank you,” and continued, “Thank you very much. Thanks to everybody, I’m very happy.”

The iPhone 5 was released on this day at 8:00 am. Ueto was interviewed by reporters just before the phone went on sale. Seeing the long line form outside the shop, she exclaimed, “That’s amazing!”

When president Son offered, “Maybe I’ll give Aya-chan an iPhone 5,” Ueto replied, “Really? Then please give me two,” asking one for her husband as well. (1.52)