On September 26th, Berryz Kobo member Tsugunaga ‘Momochi’ Momoko appeared as a special guest at the PR event for the upcoming release of the Indonesian action movie, ‘The Raid: Redemption‘, which has already become a runaway success amongst action fans around the world. Starring actor Iko Uwais, co-star Yayan Ruhian and director Gareth Evans also attended the event in front of the Shinjuku Station in Tokyo.

Momochi greeted the audience in her typical energetic fashion and said, “Here’s everyone’s idol, today as cute as ever, Momochi!  Momochi seems to be very popular as usual.” When talking about the movie, she confessed, “It’s the first time Momochi has seen an action movie.” She was asked whether this all-out action movie was a bit too scary for her and replied with a smile, “Momochi is an idol, so of course it was scary. However, compared to all the nosebleeds Momochi is giving her fans, it was an even match.”

Then Yayan Ruhian suddenly appeared on stage and reenacted his role as the villain by kidnapping Momochi in front of everyone. She exclaimed, “Is it because Momochi has been too cute!? Help~!” Fortunately Iko Uwais wasn’t too far away and immediately jumped on the stage to her rescue. After a spectacular showdown between the two, the hero once again defeated the villain. The audience loved this little treat.

Iko Uwais commented, “It’s an honor to be able to showcase such a fight scene in front of everyone in Japan.” Yayan Ruhian added, “All the cheering was amazing.” Director Gareth Evans expressed, “I love Japanese movies and I often visit here to buy DVDs, but I’m glad to be able to come here to promote my own movie this time.”

Of course Momochi was delighted about all the attention as well. She stated, “Two people fighting over Momochi makes her feel like a princess. Their strength was overwhelming.”

It has recently been announced that in addition to the Hollywood remake, there is going to be a direct sequel by Gareth Evans. Momochi used this chance to appeal to the director for a possible role and said, “Momochi is the cutest and most popular idol in Japan!” The director was tempted and asked her to show him something. Of course this was no problem for Momochi, who showed off her trademark ‘Koyu Beam’ (lit. ‘Pinky Beam’), which even knocked Yayan Ruhian off his feet.

‘The Raid: Redemption’ is scheduled to open in Japan on October 27th. 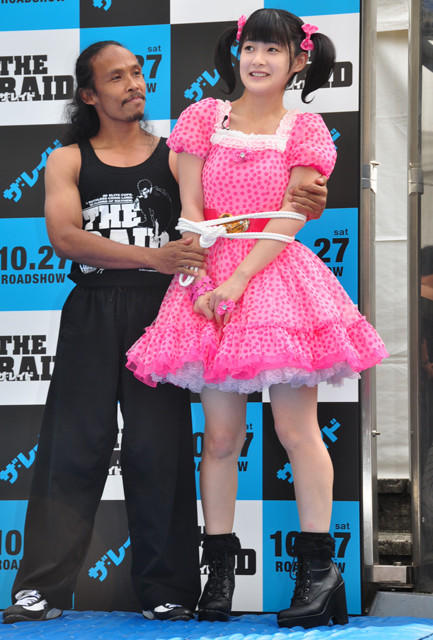 Detta yo~ More Indonesian movie airing in Japan... Although for me The Raid have lack of story,but this is must-watch film.Is that Momochi taller than Mad Dog?