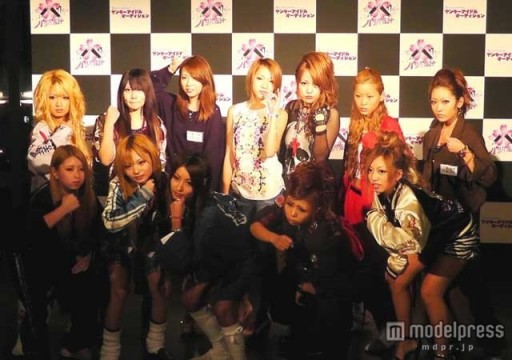 The final selection for avex’ “‘Yankee’ Idol Audition” was held in Tokyo, and 13 girls have been chosen.

As previously reported, this audition was to call for juvenile delinquent girls (known as ‘yankees’) to try venting their excessive passion and energy in the idol scene. The girls that have been selected will debut as the first idol group managed by newly created label “Bari Bari Records“.

The audition attracted great attention as they received over 600 applications, and 102 of them passed the preliminary applicant screening. Following that, 39 applicants were chosen based on the oral examination in the second round.  The third round was based on the performance, but the unique part of this performance screening was that the girls had quarrels with each other.

Lastly, they held the final selection which made the 22 finalists quarrel each other in front of special judge Shirai Koji who is known as “Joto no Teru” from Be-Bop High School movie.

The 13 girls who have been selected are quite great individuality, such as that of a single mother, pro-wrestler, ‘gal’, Tokyoite yankee, and so on.  Those members will be living together and go under vocal training, doing their best in their efforts to debut as idols.