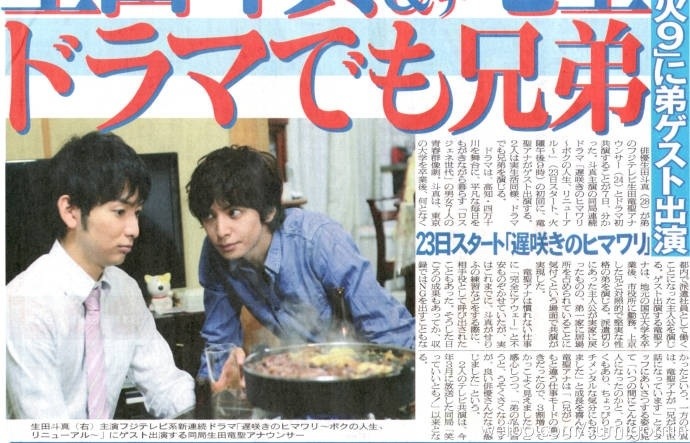 On October 7th, it was announced that FujiTV announcer Ikuta Ryusei (24) will make an appearance on older brother Ikuta Toma‘s drama「Osozaki no himawari～boku no jinsei, renewal～」to premiere on October 23rd (Tuesdays 9PM). Playing brothers as in real life.

“To have my younger brother in the same scene, it’s an indescribable and strange sensation. Made me feel fluffy the entire day”, Toma (28) said. It seems it was a day full of excitement for both brothers.

Joining FujiTV just last year this is, of course, the first time Ryusei announcer appears in a drama. Playing the role of Keitaro, the younger brother of the main character Kodaira Jotaro, he makes an appearance in the first episode of this drama.

While the older brother works as a temporary employer in Tokyo, the younger brother who just got married and had kids, works in the town hall. Adding their parents, that’s two solid families living under one roof. The older brother, whose company had to downsize by laying off temporary workers, finds himself in a situation where he has no place to live in but with his family. It is that type of scene.

Because this was the first scene they shot, Toma had an unexpected feeling “So far, that’s the most restless scene I’ve ever had to film”, he revealed.

Though, Ryusei announcer had no lines, it’s a scene where he sits down at the table with his mother (played by Kato Kazuko = 54) and they all have dinner, drink, play with the kids and have a natural performance as a family. With no NG scenes, filming was successfully completed.

According to sources, Toma is the type of getting in touch with his brother Ryusei and going together to concerts or just going out regularly, they have a deep and good relationship.

After the filming Ryusei announcer said to the staff, “Thanks for taking care of my older brother. Please keep looking after him in the future”. Toma turned around and witnessed the scene “I wonder since when he became such an adult, I’m happy and feeling a little sentimental”, he heartily said.

When asked to talk about his brother, leading actor Toma said “This is a different side of him, an unusual work mode. I’ve seen the recording and it looked cool, it might sound like a lie coming from his brother but I think he is a good actor”, renewing and creating a much deeper brotherhood. You can watch the “early flowering” of the Ikuta brothers power from the first episode.

This is the first time they appear together in television after their participation in “Waratte Iitomo!” back in March.