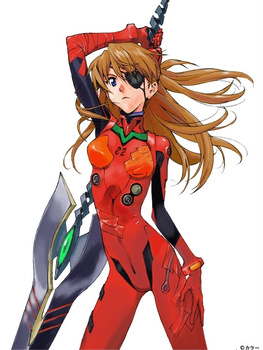 The Japanese network NTV will air the first six minutes and 38 seconds of the Evangelion: 3.0 You Can (Not) Redo (Evangelion Shin Gekijō-ban Q Quickening) film on November 16 — one day before the film opens in Japanese theaters. The preview will run after the airing of the second new Evangelion film, Evangelion: 2.0 You Can [Not] Advance, in NTV's traditional 9:00 p.m. "Friday Road Show!" timeslot for movies and specials.

The first film, Evangelion: 1.0 You Are [Not] Alone, will also run in NTV's "Friday Road Show!" one week earlier on November 9. A unique unedited "TV version" of the first film aired on NTV previously in 2009.

The "Q" or "Kyū" in the third film's title is a wordplay in Japanese; the first three films' subtitles are the names for the three classical movements (Jo-Ha-Kyū or Introduction-Exposition-Climax) of traditional Japanese music such as gagaku and Noh.