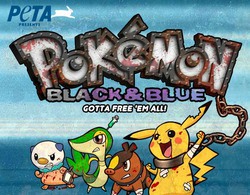 Video game conglomerate Nintendo responded to People for the Ethical Treatment of Animals (PETA)'s Pokémon parody game with an official statement on Thursday. The company stated in an official press release, “Nintendo and the Pokémon Company take the inappropriate use of our products and intellectual property seriously.”

The PETA browser game Pokémon Black & Blue launched on October 1 with the following tagline: "For generations, Pokémon have suffered at the hands of their cruel trainers. Help PETA free Pikachu and his Pokémon friends as they struggle for Pokémon liberation!"