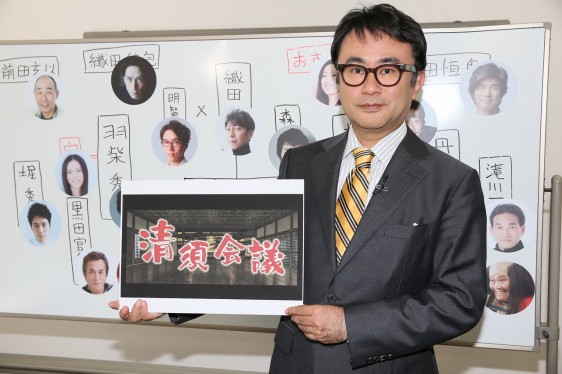 Acclaimed director Mitani Koki (“Suteki na Kanashibari,” “The Magic Hour”) has just announced the impressive cast of his upcoming film “Kiyosu Kaigi,” based on a historical novel he published earlier this year. Yakusho Koji, Oizumi Yo, Kohinata Fumiyo, and Sato Koichi, who have all appeared in Mitani films before, will play the four leads of the story.

“Kiyosu Kaigi” revolves around the conference held between several of Oda Nobunaga’s men following Oda’s death at Honno-ji, as they tried to determine the daimyo’s succession. Mitani has cast Yakusho as Shibata Katsuie, Oizumi as Hashiba Hideyoshi (later known as Toyotomi Hideyoshi), Kohinata as Niwa Nagahide, and Sato as Ikeda Tsuneoki.

The other cast members who have been announced are:

Mitani has stated that the movie will naturally contain his trademark humor, but he is also aiming to make the movie more of a human drama revolving around the characters who have staked their lives.