This year's 48th issue of Shueisha's Weekly Shonen Jump anthology is revealing the character design for true identity of the person with the No. 4 spider tattoo on Monday. The man, named Omokage, will be featured in the upcoming Gekijō-ban Hunter × Hunter: Phantom Rouge film. 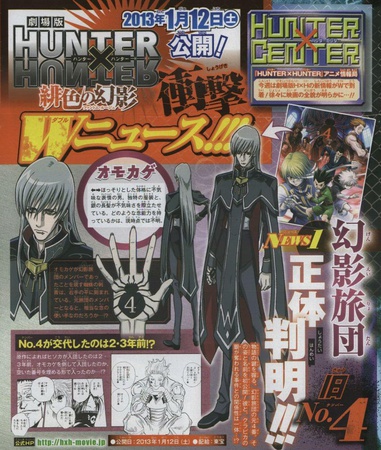 Omokage is a slender man with silver hair, unique clothes, and weird facial expressions. His "Nen" powers are currently unknown.

The film's all-new story will center around the character Kurapika, who became a hunter to seek revenge on the Phantom Troupe for the massacre of his clan. In the film, Spoiler (highlight the following white text to read) an unknown party has stolen Kurapika's "scarlet eyes," but Kurapika's life is saved with the help of Gon, Killua, and Leorio. The Phantom Troupe stands before Kurapika and the others, who are about to discover the true identity of the person with the No.4 spider tattoo.

The film, the first in the Hunter X Hunter franchise, will open in theaters in Japan on January 12, 2013. Yoshihiro Togashi's original manga has more than 60 million copies in circulation, and it already inspired two television series.