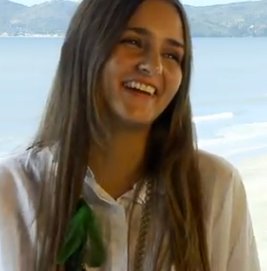 A Brazilian student is set to sell her virginity for a staggering $780,000 after she put it up for auction online.

A man called Natsu, from Japan, fended off strong competition from American bidders Jack Miller and Jack Right, and a big-spender from India, Rudra Chatterjee, to secure a date with 20-year-old Catarina Migliorini.

The auction ended at 4 a.m. EST this morning, and the physical education student — who said she will use the cash to build homes for poverty-stricken families — was the subject of 15 bids.

Catarina's move sparked outrage across the globe, with many claiming she was little more than a prostitute.

She also caused controversy when she revealed she would be followed every step of the way by an Australian crew for a documentary film called “Virgins Wanted.”

But, she said: “I saw this as a business. I have the opportunity to travel, to be part of a movie and get a bonus with it.

“If you only do it once in your life then you are not a prostitute, just like if you take one amazing photograph it does not automatically make you a photographer.

“The auction is just business, I'm a romantic girl at heart and believe in love. But this will make a big difference to my area,” she told Folha newspaper.

Catarina will be “delivered” to her buyer on board a plane between Australia and the U.S. — being interviewed before and after the sexual act.

The intercourse itself will not be filmed and Natsu will retain a right to be anonymous, without his picture appearing in the media.

Sex toys will be banned from use and a condom will be compulsory, with Catarina saying she was prepared to prove to any skeptics that she has not had sex before.

Natsu will be tested for sexually transmitted diseases prior to the encounter.