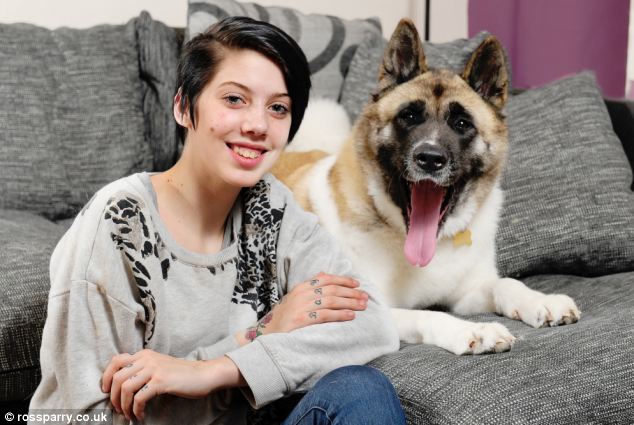 A pet dog has saved the life of her teenage owner by jumping on her back when she started choking on her dinner.

Sheba the Japanese Akita bounded into the room to help 18-year-old Aysha Perry when she began choking on a 1.5in piece of chicken which was stuck in her throat.

As Ms Perry struggled to breath and thought she might die, Sheba saved the day last Friday.

Ms Perry of Sutton-in-Ashfield, Nottinghamshire said: ‘She whacked me on the back with one of her huge front paws and the piece of chicken flew out.

‘I’ve got to say it hurt a little as she is such a huge dog but I can’t really complain.

‘I was at home on my own and genuinely thought I was going to die.

‘I’ve only had her for two weeks, she must have heard me choking and came running in.

‘My flatmate wasn’t home so there was no one else around to help me.

‘I was on the floor trying to get to my phone when she came running in. It’s a good job she has such big paws otherwise I don’t think it would have dislodged the chicken.’

Ms Perry, a tattoo artist, has since done some research into the breed of her four-year-old life-saver.

She said: ‘They are quite an unpredictable breed and were used for bringing down bears.

‘She could obviously sense I was in distress.’

Ms Perry has since repaid the favour after Sheba got her paw stuck in a fence a few days after her life-threatening experience.

She said: ‘I don’t think we are quite even yet but we have definitely got a special relationship.

‘After she helped get the chicken out of my throat she began licking my face to make sure I was okay.

‘There’s no doubt that she knew what she had done. She knew she had saved my life. I could tell by the way she looked and wouldn’t let me go.

‘I think she deserves some recognition because it was a very heroic act. I don’t know anyone else whose dog would do something like that.’

Japanese Akitas are known for their fierce protectiveness. Enthusiasts claim mothers in Japan, in ancient times, relied heavily on their pet Akitas to take care of their very young children.