Kasai Tomomi quits the One Month/10,000 Yen Challenge after 5 days, first in the show's history 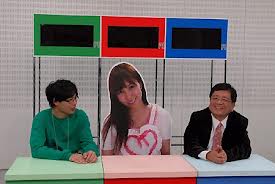 It was revealed on the November 8th broadcast of TV Asahi's popular Ikinari! Ougon Densetsu segment, the "One Month/10,000 Yen Challenge" that AKB48's Kasai Tomomi had officially withdrawn from the competition.

Kasai Tomomi, the first from AKB48 to take on the challenge, on the morning of the 5th day of "efficient living", said, "I'm going [home] to pick up some stuff and come back," but in fact did not come back, indicating her retirement. It is the first in the show's history and has become a shocking development.

The One Month/10,000 Yen Challenge is a popular segment where celebrities are given 10,000 yen (approximately 125 USD) to spend on food, gas, and water for a month. On the the last day the remaining money is counted and whoever has the most money wins. From the 18th [of October], the battle between Kasai, Comedy duo Heisei Nobushi Kobushi's Yoshimura Takashi and economic critic Morinaga Takurou unfolded. Kasai, like her competitors, brought her favorite things from home to decorate her new "efficient living" room to her style, and put on her own apron and was ready to display her ability, but from the first day she revealed, "I'm anxious...I've come prepared for the worst".

On the 5th day of the challenge, Kasai, who said to staff, "I'm going home to pick up some things," did not show up for the mid-competition tally or counting of the remaining money and ranking later that day, and did not return on the 6th day thereafter. On top of that, having missed the second tallying announcement on the 10th day, [Kasai] did not show up after agreeing to meet with the show on the 11th day and discuss her intention of staying. Because of this, her agency and the show decided after discussion that she would quit the segment.

On the 15th day tally announcement Yoshimura, after learning about Kasai giving up on the competition, said, "I came to this show with the intention of setting precendence but now it seems Kasai is the most unprecedented of us all. I'm surprised." Morinaga, appearing not to accept the shocking development, commented, "Kasai as our center being gone is not visually good. The two of us, Yoshimura and I, cannot handle this by ourselves. I didn't even get her signature...my motivation has weakened."

Yoshimura called out to Kasai, saying "You can always come back! We'll be waiting for you! It's OK, we're not mad. Just show yourself to somebody once please!", while Morinaga petitioned, "It says on the news online that if you lose you'll have to form a sub-unit with me? So please read up on that. Let's sing and dance together. If you come back, you can use as much money as you want. Yoshimura and I will shell out 2000 yen each. So please come back! And if you can't do that, then your signature, please..."

Due to Kasai's abandonment, the last half of the challenge, which is to be aired on the 15th [of November], will be a one-on-one battle between Yoshimura and Morinaga. The male one-on-one battle between Yoshimura, who's living it up on the riverbed has taken a toll on his body; and Morinaga, who's dream of meeting and dancing Heavy Rotation with Kasai should he defeat her was shattered therefore ruining his motivation, is airing Thursday nights at 7pm. (Digital Mainichi)


Kasai later posted an apology on her blog but is still being heavily criticized for her unprofessionalism by netizens and comedians alike on media networking sites.

Souce and picture credit
Translated by yours truly


Sorry if the translation is a little wonky, the sentences on the original article were way. too. long.
News is a few days old, but still, unbelievably unprofessional on her part.
There are other much more hardworking girls in AKB that could've completed the challenge with grace.
Yoshimura and Morinaga's comments were sweet tho.