BiS Let Us In On Their Plans For Mass Idol-ocide 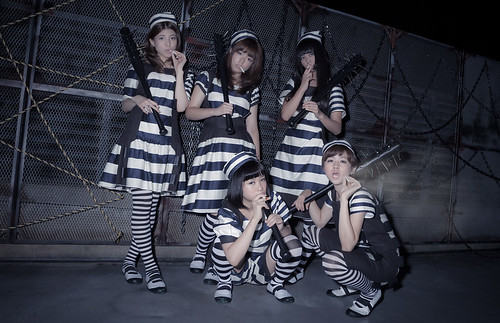 MTV's Japanese entertainment news site MTV81 recently got to sit down with idol group BiS as they're promoting the release of their first album, Idol is Dead.

So tell us a bit about how the group got started.
Pour “Pu-chan” Lui (P): I was a solo artist and I was already working with our manager, and I really hate him so I decided to start a group just to annoy him, so that’s when we started doing auditions for new members, which is when Nozomi joined.
How did you choose the new members?
P: We were basically looking for the craziest people we could find.

So she was the craziest one you could find?
P: Yes! She was a hikikomori (social shut-in) in Akita (prefecture) when we found her.
Nozomi “Nozoshan” Hirano: I didn’t really smile a lot, but the other members were really nice to me so I cheered up.
And so the group made a bit of a splash with the famous “nude” video for “My Ixxx.” How did that come about?
P: That was the director’s idea!
So since the group started, you’ve changed members a few times. Why the changes?
P: Basically when members leave, we have to recruit new members. It’s actually a pretty tough schedule and sometimes people leave because of that so we have to hold new auditions.
BiS have a sort of “bad girl” image, but are you really bad girls?
P: No! Cutie girls!
Cute but crazy…
P: Just a bit!
And who would be the craziest?
P: Crazy? That would be Wacky and Yuffie.
Yufu “Yuffie” Terashima (Y): Me?
P: Yuffie’s a stalker and Wacky’s just a sort of “natural crazy.” Like she’ll randomly start singing songs about udon noodles sometimes.
Yurika “Wacky” Wakisaka (W): I like udon!
So what makes you different from a typical idol group?
P: Well for a start we don’t dress up in the same sorts of costumes like a normal idol group.
What’s the concept behind the costumes you’re wearing now?
P: Well, they go together with things like the guillotine that we used on the CD cover, and we also use on stage too. In the idol world we’ve done lots of bad things, like making nude music videos and we put up decorations on trains without telling anyone, and we don’t like each other. Idol groups always pretend they’re really good friends, but we admit that we don’t like each other. We’re just business partners (laughs).
The guillotine’s an image that most people associate with the French Revolution. Is that what this is, the “Idol Revolution”?
P: It’s like we’re in the idol “Sengoku Jidai” (Japan’s warring states or civil war period).
With your music, there seems to be a lot more heavy metal and trance influence. Do you go out to those kinds of shows yourself?
P: No, they’re scary! Clubs are places where all the cool people go out to, but we’re not cool enough to go out to those places…
How do you make the songs?
P: Basically our producer Kenta Matsukuma makes the tracks.
He’s worked a lot with Shoko Nakagawa too, hasn’t he?
P: Yeah. He makes all the music but we write the lyrics.
I see, and you have a new album out now. Tell us which songs you like.
W: “Blew” and “Urge Over Kill of Love.”
P: I like “Hitoribochi” and “Chelsea.”
N: Yeah, “Chelsea” and “Urge Over Kill of Love.”
Rio “Mitchel” Michibayashi (M): I like “Our Song,” which is a cover of Shinichi Osawa.
“Chelsea” seems like a popular song among the group.
P: It’s a good one to sing live. It’s one we can really get into when we’re doing a performance.
And the album title “Idol is Dead”; tell us, how did they die?
P: We’re going to kill all of them! It’s our mission.
So who are you going to kill first?
P: XXXX8 first! And not one by one either, all of them at once!
And once there’s no more idols, what do you replace them with? What comes after idol?
P: Then it’s finished! Once we’ve taken over, got rid of everybody and it’s only us, standing at the top, our job is done!
Good luck with that. So in the immediate future, what have you got coming up?
P: We’ve got our biggest show, a concert at (sumo venue) Ryogoku Kokugikan next year in March. It’s a really big place so we’re scared no one’s going to come.
I’ve seen punk shows where there are only four people in the audience, but it can still be fun. Do you have any special plans for what you’re going to do with the show?
P: We’re not sure yet, but we’d like to have the stage in the middle of the hall so even if there are only four fans, they can still go one on each side of us!
And do you have any message you want to give to overseas readers?
P: We’d like to play to an overseas audience, hopefully to play some kind of Japan Expo event. It would be great to play abroad as soon as we get the chance!

Funny interview. And the album is a modern j-rock classic. Gorgeous. Can they sell out a 10 000 capacity venue?
Source: http://www.mtv81.com/features/interviews/bis-let-us-in-on-their-plans-for-mass-idol-ocide