Kara Gets Own Animated Show 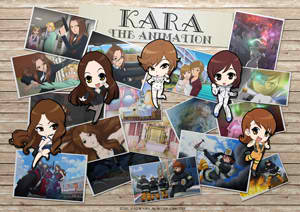 The five-member South Korean girl pop group Kara will get their own animated adaptation that will air in Japan next spring. The tentatively titled Kara The Animation television series will consist of five episodes, and each episode will focus on one of the band's members. The fictional stories will feature each of the members in a different career: Gyuri as a police officer, Seungyeon as an astronaut, Nicole as a passenger boat captain, Hara as security police for the Monaco royal family, and Jiyoung as a sexy and spirited firefighter.

Each group member will provide the voices for the animated versions of themselves, and so the series will air with Korean dialogue and will have Japanese subtitles. The series will mark each members' voice-acting debut, and the group will also provide the show's theme song.


The reason for the new series is to provide a way for Kara to reach out to fans in Japan, even though the members do not get many chances to visit Japan. Gyuri herself is a well-known fan of manga such as One Piece and anime. Her own mother was a voice actress, so she said that she and her mother were overjoyed at her first opportunity to voice-act.

An advanced preview of the show will premiere during the group's first performance at the Tokyo Dome stadium on January 6. The show will air in both South Korea and Japan.