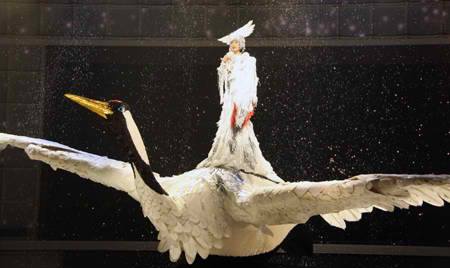 NHK’s decision to omit veteran enka singer Sachiko Kobayashi, 59, from this year’s “Kohaku Uta Gassen” (Red and White Song Contest) on New Year’s Eve, has generated a lot of buzz in the tabloid media and online.

According to a survey conducted by Yahoo Japan! news, 72,000 out of 82,000 respondents—about 90%—agreed with NHK’s decision to omit the singer known for her lavish costumes.

Many of those who agreed gave as their reason the ongoing trouble between Kobayashi and her former long-term business partner.

The trouble started earlier this year after Kobayashi fired Yoshie Sekine, president of Sachiko Promotions, who had managed her for more than 30 years. The tabloids speculated that she was prompted to fire Sekine by her new husband (whom she married in November 2011) who thought the extravagant costumes were a waste of money and didn’t look good, especially after the March 11, 2011 disaster.

“The world of enka is all about morality and dignity, but Kobayashi destroyed this image by getting involved in such a dispute,” said one respondent. Another said the whole incident has sullied her public image.

The survey will continue until Dec 6.