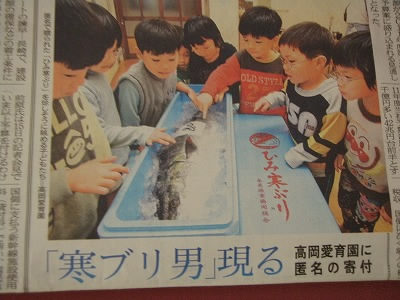 Just a few weeks after the heartwarming story of an evil villain donating backpacks to a Japanese orphanage, comes another tale of anonymous Japanese winter philanthropy, this time from Toyama prefecture.

At around 2:30 pm on December 8, a female staff member at an orphanage in Takaoka city noticed a man pulling up in a white vehicle and placing three large boxes, two styrofoam and one cardboard, at the base of a telephone pole near the entrance. The man, who seemed to be in his 30s, beckoned the staff member over with his hand and, without saying anything, left the boxes and drove off.

In the cardboard box were five daikon, or Japanese radishes. In the styrofoam boxes were two large, plump yellowtail, accompanied by a letter that read: “The men of the ocean have braved billowing waves, putting their lives on the line for these kan-buri (winter yellowtail).” The letter was signed: “Yours truly  A Man Who Loves the Ocean”.

At first, vegetables and fish may seem like a rather strange combination to leave outside an orphanage, but the man had actually gifted the children with a luxurious winter feast: winter yellowtail are a major seasonal delicacy that normally sell for anywhere between 30-40,000 yen ($350-$480) a fish.

The daikon radish were left to be either sliced and used in buri daikon, or grated into daikon oroshi and enjoyed with as a topping if they chose to grill the yellowtail or prepare it as sashimi.

The sea-loving stranger even left an envelope containing a 10,000 yen bill, worth around $120 US, to be used for hiring a local chef to prepare the fish.

The orphans burst into excitement upon seeing seeing the two large fish, which were measured to be 1 meter (3.2 feet) long and weigh 8 and 10 kg (17.6 & 22 lbs) each. And it wasn’t just the size of the fish that got the children worked up: the kids knew what was in store as the orphanage received a similar gift of yellowtail from a mysterious “man of the ocean” last year as well.

If you thought it couldn’t get any more heartwarming, the local fish dealer offered to prepare the yellowtail for the orphans free of charge and on December 8 and 9, the children feasted on sashimi and grilled yellowtail—with grated daikon, of course.