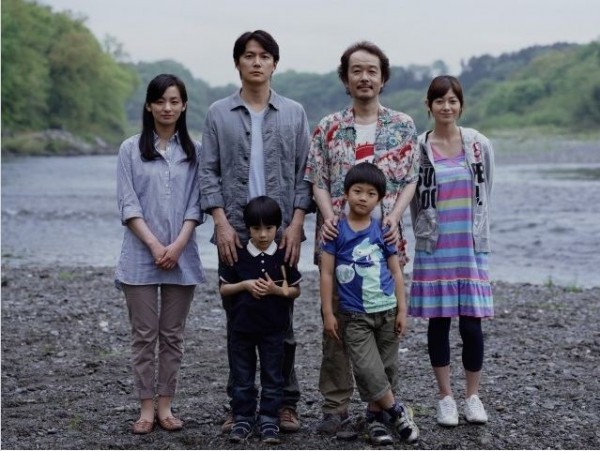 Actor/singer-songwriter Fukuyama Masaharu will be teaming up with director Koreeda Hirokazu for a new movie called ‘Soshite Chichi ni Naru‘.

The story of ‘Soshite Chichi ni Naru’ will revolve around the growth and hardships of a man named Ryota (Fukuyama) and his family. One day, he receives a phone call from the hospital and finds out that his 6-year-old son is someone else’s son.

Director Koreeda commented, “I discussed each scene one by one with Fukuyama-san, and together, we constructed this three-dimensional character named Ryota. Both the good points and the bad points. It was very fun group work.” He continued, “By creating a contrast between Fukuyama-san and Lily-san’s father roles as well as Ono-san and Maki-san’s mother roles, I think we were able to portray it as humanly as possible. I am confident that I was able to draw out Fukuyama-san’s charm that people have never seen before.”

On working with director Koreeda, Fukuyama reflected, “He’s like a singer-songwriter. He’s a type that will show his unconscious mind that he’s not aware of through his works. I think he’s a person that will arrive at a place that he cannot control.”

Ono expressed, “Since entering this world, I’ve paid attention to Koreeda-san, and I’ve wanted to be in his film, so I was genuinely
happy. While working with him, my lines and feelings changed rapidly. I was excited, and I had fun. My co-stars were all people I love, so I was very happy.”

Maki, who stated he admires director Koreeda, said, “It was a calm place. With a calm mind, I was able to sincerely face my role. I was embarrassed to play a married couple with Lily-san, but my mock married couple experience wasn’t bad.” On Fukuyama, she stated, “I think people will be able to see a Fukuyama-san they’ve never seen before. I’m looking forward to its completion as a part of the audience as well.”

The movie will also star Fubuki Jun, Kunimura Jun, Kiki Kirin, and Natsuyagi Isao. Filming for the movie started back on May 6th.

‘Soshite Chichi ni Naru’ is scheduled to open in theaters on October 5th of next year.

** So it's like that, the boy Masha holds had also acted on his Kazoku ni Narou yo PV (as his son too?), the story and Masha with Ono Machiko as couple are interesting ^^, but the released date still so far away Y_Y