The Japanese game developer Square Enix posted the results on Thursday for a poll for fans' favorite female character from the company's Final Fantasy franchise. The poll was held on Square Enix's Final Fantasy 25th anniversary commemoration forums. Forum members could vote for one character only, and if they voted for more than one character, only the first vote counted. 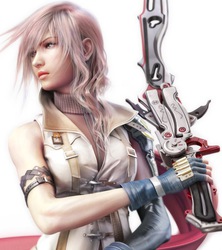 Square Enix noted that Lightning had won the poll above Aerith by a narrow margin.