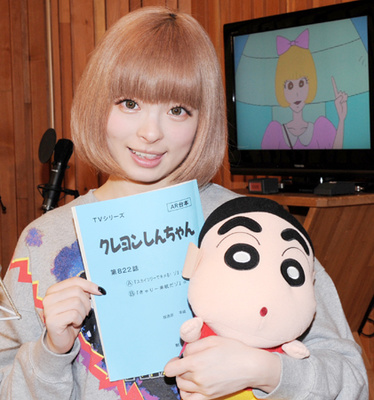 Model/singer Kyary Pamyu Pamyu will make her voice-acting debut by playing herself on the Crayon Shin-chan anime on January 25. Her "Kimi ni 100 Percent" song has already been playing as the theme song of the anime since October.

Kyary Pamyu Pamyu is a self-described huge Crayon Shin-chan fan who has all of the original manga volumes and catches the anime films as they come out. She said that her voice-acting experience was like a delightful dream.

The story of the January 25 episode has Kyary Pamyu Pamyu coming into the anime like Commodore Matthew Perry's black-ship expedition that opened up Edo-era Japan. She will make her grand entrance on pink ships — only, instead of introducing Western culture as Perry did, she will introduce "false eyelashes." The anime version of the singer will be sporting a blonde bob haircut with a pink ribbon, as well as a matching one-piece dress with pochette handbag.