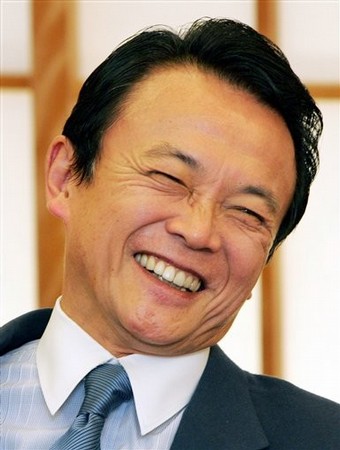 Japan's finance minister Taro Aso said Monday the elderly should be allowed to "hurry up and die" instead of costing the government money for end-of-life medical care.

Aso, who also doubles as deputy prime minister, reportedly said during a meeting of the National Council on Social Security Reforms: "Heaven forbid if you are forced to live on when you want to die. You cannot sleep well when you think it's all paid by the government.

"This won't be solved unless you let them hurry up and die," he said.

"I don't need that kind of care. I will die quickly," he said adding he had left written instructions that his life is not artificially prolonged.

During the meeting, he reportedly referred to "tube people" when talking of patients who cannot feed themselves.

The 72-year-old Aso, a former prime minister, has been in his current job less than a month, but has a long history of planting his foot firmly in his mouth.

In 2001 he triggered a furore by saying a successful country was one where "rich Jews" wanted to live.

After Monday's mis-step, he tried to backtrack, insisting he had only been talking about his personal wishes when he said the elderly should shuffle off quickly.

"I said what I personally believe, not what the end-of-life medical care system should be," he told reporters.

"It is important that you can spend the final days of your life peacefully."

Aso was born into a blue-blooded industrialist family but his often crude verbal slip-ups stand in marked contrast to his heritage.

He is the grandson of Shigeru Yoshida, one of Japan's most influential prime ministers who helped rebuild the country from the ashes of World War II, and he is married to the daughter of another former premier.

Ageing is a sensitive issue in Japan, one of the world's oldest countries, with almost a quarter of its 128 million people over 60. That figure is expected to rise to 40 percent within the next half-century.

At the same time a shrinking number of workers is placing further strain on an already groaning social security system, with not enough money going into the pot to support those who depend on it.