Yokoyama Kimitaka, not Yokoyama Yuu, caught on a ~date~ with unknown woman

She appears to be younger than him, in her early to mid twenties.

Twitter exploded last night with the tweets of the broken hearted

" The weekly magazine took pictures of Yokoyama Kimitaka. That is not Yokoyama Yuu "

" In regards to Yokoyama-kun. Yokoyama Yuu belongs to eighters. Yokoyama Kimitaka belongs to that woman. is the general consensus. I truly believe in that too "
A celebrity gossip twitter also added some info: 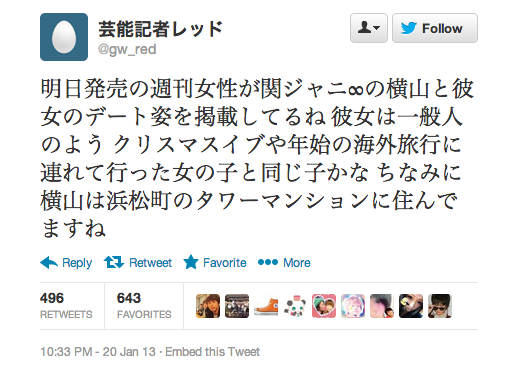 " Tomorrow's Shuukan Josei will print a date between Yokoyama Yuu and a woman. The woman appears to be ordinary. She could be the same woman that went with him on foreign trip on Christmas Eve and New Years. Espeaking of which, Yokoyama lives in a highrise in Hamamatsu-cho (in Tokyo) "
Of course, no comments have been made officially from Yokoyama Yuu's, I mean Kimitaka's, agency.
LOL someone's getting D
Though, who knows. I doubt his agency is gonna respond and the pictures don't show anything saucy
source: twitter, shuukan josei, the internet, here too
Tags: kanjani8, rumors, twitter
Subscribe