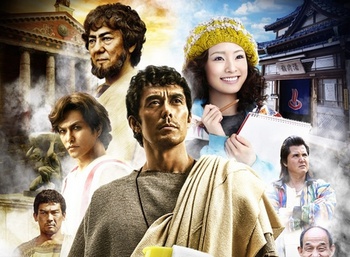 A sequel to the live-action film adaptation of Mari Yamazaki's Thermae Romae manga going into production for next year. The film's main cast members, including star Hiroshi Abe as a Roman who time-travels from ancient times to modern Tokyo via bathhouses, are set to reprise their roles.

The film will begin shooting in April and will open nationwide during Japan's Golden Week string of holidays in spring 2014. The film is being shot on location in Bulgaria and not in Rome's famed Cinecittà film studio like the first film was; this marks the first time a Japanese movie is being filmed in that country.

Thermae Romae II will revolve around Abe's character Lucius being ordered to construct a bath within Rome's famous Colosseum. According to the Sankei Sports newspaper, the film's staff are constructing a full-scale, 50-meter-high (about 160-foot-high) replica set of the Colosseum for the film, at a cost of several hundred million yen (several million US dollars). Hideki Takeuchi is returning to direct the sequel. Masachika Ichimura, Kazuki Kitamura and Kai Shishido will all return to the film as ancient Romans, and Aya Ueto, Riki Takeuchi, and Takashi Sasano will return to the film as modern Japanese people.

The first film opened in Japan on April 28 and has earned 5.98 billion yen (US$66 million), making the film the second-highest grossing film in Japan in 2012. (Box Office Mojo lists that the film has earned US$74 million.)

The original manga is a comedy about Lucius — an architect of public bath houses (thermae) in ancient Rome — who time-travels to various modern-day baths in Japan. Through manga and essay passages, Yamazaki explores the two cultures in the world "that have loved baths the most: the Japanese and the Romans!" Yamazaki launched the manga in 2008, and the fifth compiled book volume shipped in September. Yen Press released the first omnibus volume in North America in November.

The work won the Manga Taisho (Cartoon Grand Prize) award in 2010, followed by the Short Work Prize in the 14th Tezuka Osamu Cultural Prizes. Although Yamazaki was born in Tokyo, she now lives in Chicago.