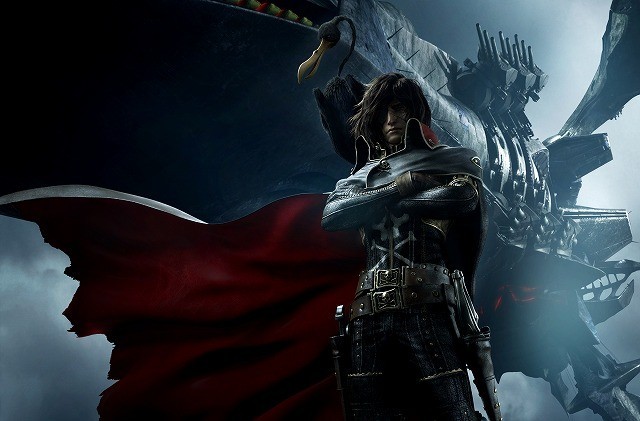 On Thursday, the upcoming CG-animated Space Pirate Captain Harlock movie was officially announced as a fall 2013 release. Toei Animation originally announced the project a few years back and screened an early trailer at the 2010 Tokyo International Anime Fair, but very little information has been released since then.

The movie, tentatively titled Captain Harlock in Japan, will be the most expensive product from Toei Animation to date, with production costs totaling over $30 million USD. It will be directed by Shinji Aramaki (Appleseed) and Harutoshi Fukui (Aegis) is handling the screenplay.

Instead of simply being a remake of past works, it’s being described as a reboot, akin to Christopher Nolan’s Batman trilogy. Fukui’s screenplay will emphasize the darker side of the Harlock character and the film’s theme will reflect various aspects of modern society. Meanwhile, Aramaki is reportedly taking a “Hollywood style” approach to production with an emphasis on “speedy action”.

In 1978, the “Space Pirate Captain Harlock” animated television series captured the imaginations of a whole generation of young boys as it told the story of a rebellious pirate captain who led a 40-man crew on the starship Arcadia to oppose enemies of Earth when the government was unable to. Additionally, the series has aired throughout Europe for decades and is especially beloved in France. For that reason, Toei is banking on the film doing well overseas as well as in Japan.