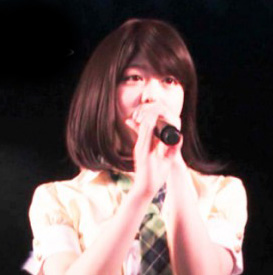 Whether you view it as a publicity stunt or a failed attempt at a cover-up, the scandal involving AKB48 member Minami Minegishi definitely got people talking and debating about Japanese celebrity culture again. And this time, her first appearance as a ‘trainee’ might spark another round of debate.

Minegishi was photographed doing a “walk of shame” after leaving the house of Alan Shirahama, a member of boy band Generations, last week. Her subsequent shaved head video apology and demotion to the lowest rank of “trainee” attracted international attention. People outside Japan mostly couldn’t fathom the world of Japanese idols where dating and having sex is strictly not allowed, even in this day and age. Now, the backlash from the incident and the apology is being felt by the group, so much that they changed the settings of the video apology to private, never mind that more than six million people have already seen it. Her appearance on stage as a trainee with a full head of hair (a wig, of course) has drawn the ire of netizens. Some feel like she’s not really sorry it happened and some are annoyed that they’re now acting as if the incident never really happened.

But in Japanese celebrity culture, this is not really a surprise. Everyone tries to forget quickly and move on as if nothing really happened. Disgraced celebrities either totally disappear from the entertainment world and becomes taboo almost immediately. Old clips featuring said celebrity will not be used anymore, or if they have to be used, they will either be edited or blurred out, as if they’re some crime victim. But even weirdly so, celebrities who leave the entertainment industry (even without a scandal) also get the edited/blurred out treatment, sometimes at their request. This Japanese attitude is evident not just in showbusiness but in society as well, which sometimes angers Japan’s neighbours (and former colonies) but also allows the country and its people to pick themselves up after a tragedy and just move on, without looking at the past.