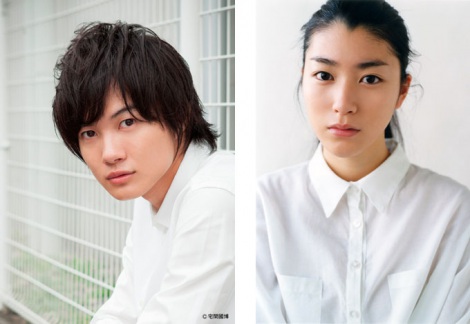 On February 8th, it was announced that Miyabe Miyuki’s best seller novel “Kogure Shashinkan” would be getting a live-action drama adaptation on NHK BS Premium starring Kamiki Ryonosuke. Narumi Riko has been cast as the heroine.
Kamiki and Narumi have co-starred with each other before in “Ruri no Shima SPECIAL 2007” (NTV) and “Wedding Planner SWEET Delivery” (Fuji TV).
In the drama, Kamiki is playing “Hanabishi Eiichi,” who is in the second year of high school. Eiichi’s family moved into a house that used to be a photo studio. One day, mysterious photos, which can be described as photographs of spirits, are brought in to him one after another. Eiichi sets out to investigate the riddles behind the photos, and the feelings of several people hidden in the photos start getting revealed. It also lets Eiichi and people around him grow up.
Narumi plays the role of the real estate agent who arranged the buying and selling of the photo studio. She is a curt, but also insightful, and she gives advice to the protagonist about the solution of the riddles. They say it’s a ‘no comment’ regarding the romance between she and Eiichi.
Other cast members are Ishiguro Ken (as Eiichi’s father), Matsushita Yuki (as Eiichi’s mother), Sasano Takashi, and Horii Arata.
“Kogure Shashinkan” will start airing on March 31st with a total of 4 episodes. (The first episode will start at 9:00 pm, and the rest will start at 10:00pm.)