On Japan’s school lunch menu: A healthy meal, made from scratch 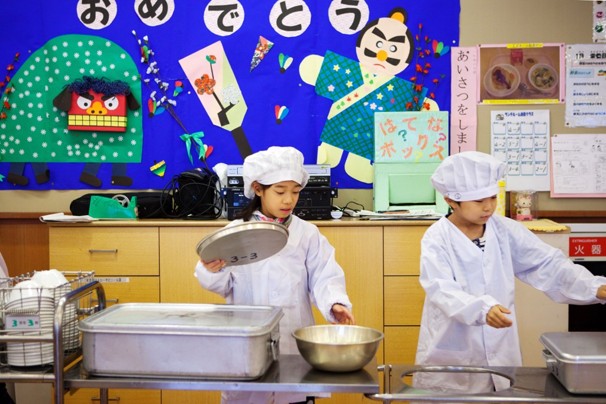 In Japan, school lunch means a regular meal, not one that harms your health. The food is grown locally and almost never frozen. There’s no mystery in front of the meat. From time to time, parents even call up with an unusual question: Can they get the recipes?

“Parents hear their kids talking about what they had for lunch,” said Tatsuji Shino, the principal at Umejima Elementary School in Tokyo, “and kids ask them to re-create the meals at home.”

Japan takes seriously both its food and its health and, as a result, its school lunches are a point of national pride — not a source of dismay. As other countries, including the United States, struggle to design school meals that are healthy, tasty and affordable, Japan has all but solved the puzzle, using a system that officials here describe as utterly common sense.

In the United States, where obesity rates have tripled over the past three decades,new legislation hampioned by Michelle Obama has pushed schools to debut menus with controversial calorie restrictions. But even the healthiest choices are generally provided by large agri-food companies, cooked off site, frozen and then reheated, and forced to compete in cafeterias with all things fried, salty and sweet.

Schools in Japan, by contrast, give children the sort of food they’d get at home, not at a stadium. The meals are often made from scratch. They’re balanced but hearty, heavy on rice and vegetables, fish and soups. The meals haven’t changed much in four decades.

Mealtime is a scene of communal duty: In both elementary and middle schools, students don white coats and caps and serve their classmates. Children eat in their classrooms. They get identical meals, and if they leave food untouched, they are out of luck: Their schools have no vending machines. Barring dietary restrictions, children in most districts can’t bring food to school, either, until they reach high school.

Japan’s system has an envious payoff — its kids are relatively healthy. According to government data, Japan’s child obesity rate, always among the world’s lowest, has declined for each of the past six years, a period during which the country has expanded its dietary education program.

Japan does struggle with childhood and adolescent eating disorders, and government data show a rise in the number of extremely skinny children. But there is virtually no malnutrition resulting from poverty. Japan’s children will live on average to 83, longer than those in any other country, according to the World Health Organization.

When it comes to food, Japan has some deeply ingrained advantages. Children are taught to eat what they are served, meaning they are prone to accept, rather than revolt against, the food on their plates. But Japan also invests heavily in cultivating this mind-set. Most schools employ nutritionists who, among other tasks, work with children who are picky or unhealthy eaters.

Though Japan’s central government sets basic nutritional guidelines, regulation is surprisingly minimal. Not every meal has to meet precise caloric guidelines. At many schools, a nutritionist draws up the recipes — no bureaucratic interference. Central government officials say they have ultimate authority to step in if schools are serving unhealthy food, but they can’t think of any examples where that actually happened.

Funding for lunches is handled locally, too: Municipalities pay for labor costs, but parents — billed monthly — pay for the ingredients, about $3 per meal, with reduced and free options for poorer families.

Notable is what’s lacking: You don’t see low-fat options. You don’t see dessert, other than fruit and yogurt. You occasionally see fried food, but in stark moderation. On a recent day at Umejima, kids were served the Japanese version of fried chicken, known as karaage. Each child was allowed one nugget.

Officials at Adachi Ward, in northern Tokyo, say they run a “fairly standard” school lunch program in the ward’s 71 elementary schools and 37 middle schools. And because this is food-obsessed Japan, those standard meals are restaurant-worthy; in fact, the ward publishes a full-color cookbook based on its best school meals.

District officials allow themselves to brag for just one reason, their success in cutting food waste to 5 percent. This follows the “Oishii Kyushoku,” or “Delicious School Lunch,” program they created five years ago to get kids more interested in what they were eating.

At Umejima, one of Adachi Ward’s schools, the hallway walls look like the pages of Bon Appetit magazine. Hand drawings of healthy lunches dreamed up by students hang near the principal’s office. There are charts of beans and spices. Then there’s the real food, which is chopped, diced and simmered every morning, beginning at 8 a.m., by a staff of 12. Shortly after noon, they’ll have meals for 760 students.

I know this article might be a bit old but it's still a good read.

I posted this on FB and a lot of my friends who work in Japanese schools agreed with the post; school lunches are amazingly good. I must also agree as my schools' lunches are aaaaamazing. They make everyone's least favorite foods seem so delicious. I eat too much school lunch sometimes because they are so good.

Because most of my FB friends are Americans, they also argue that America can do this too. But, can America really do this? Having a home cooked meal in the school sounds nice but it's a lot of work. And since a vast number of America's elementary and junior high schools are crowded with a population of 900-1200 students for each school (in big towns, cities, and whatnots' schools), it seems impossible? I had home-cooked meals in North Dakota because my school's population was only 200 students. But I didn't have that kind of lunch when I moved to the Washington DC metro area. It can be done in small schools but not in the bigger ones.