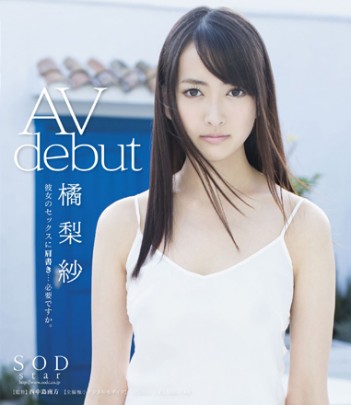 Hot on the heels of a scandal involving an AKB48 member and a liaison with a dancer, a former member of the idol group last week released her adult video (AV) debut.

The contents of the disc, however, are not nearly as scandalous as her comments on her previous sexual encounters, says entertainment site Men’s Cyzo (Feb. 4).

Takamatsu resigned from AKB48 in 2010 while at the trainee level.

The disc comes a week after the publication of photos of 20-year-old Minami Minegishi leaving the residence of a member of boy band Generations, which was notable since AKB48 has a strict policy prohibiting relationships with members of the opposite sex.

Speaking as Tachibana, she explains her motivations for appearing in the film in an interview contained on the 180-minute disc. “I do not have any positive memories regarding sex,” she says. “If I can become comfortable with sex it may change my views of men. My personality of turning my back (to people) may also change a little.”

Her negative views of intimacy and men go back to her first encounter. At the age of 17, a course of events led her to be taken to a love hotel by an older acquaintance she really did not know or care for. “He forced himself on me violently,” she says.

Performing under the name Riko Yamaguchi, she debuted in 2010. At the time, she famously confessed to having sex, like Takamatsu, during her tenure as a member of AKB48. “At the age of 17, I had sex with an older man, a member of the entertainment industry,” she said.

The reporter says that AKB48′s prohibition on affection is total “nonsense” considering the inconsistencies involved. “There may be a ban on love, but sex is ok,” the source chuckles.

That is, sex with male members in showbiz. The reporter says that rising to the top through the “pillow trade,” or makura eigyo, is not dead in the entertainment industry.

“That evil custom is still firmly rooted in some ways in the business,” says the reporter. “AKB48 is not immune to the practice. Despite the no-boyfriends rule, it still exists, and the hypocrisy is extreme.”

asweetsymphony 13th-Feb-2013 06:20 pm (UTC)
Wait, someone forced himself on her... That's sexual assault. My goodness, I didn't know its that bad in Japan that girls don't even bother reporting these kind of things to the police. Hopefully, the police will start an investigation after this.

ttalktomesoftly 13th-Feb-2013 06:29 pm (UTC)
She was sexually assaulted and in order to get over that she becomes an AV Actress?

blazingeternity 13th-Feb-2013 08:37 pm (UTC)
As I understood the article, "evil custom" refers to the practise of having to sleep with influential showbiz people to get a chance in the industry.
My guess would be that Eri got talked into going to the hotel for the sake of her career without knowing of that "evil custom" and then got raped :(
(no subject) -

And girl that is rape. I don't think it is ever a good idea to let someone with power have their way with you, no matter how famous you want to be (or it seems to be implied).

As for the method of getting over the incident, my brain can't quite wrap around it but well everyone has their own ways of recovery so whichever floats your boat.

Eri was never even an official member of AKB48. She was merely an trainee, not even a popular one, which means those love-ban rules aren't quite strengthened for her (altho she really should know better. Her reason her quitting perhaps?)

#2: This girl is weird. In order to overcome your fear of sex with unknown men, you go out and have more sex with more unknown men? How what why i can't even

#3: I wish Miichan would stop getting dragged into every other article. :

myharu 13th-Feb-2013 07:28 pm (UTC)
In response to number 2: people cope with traumatic experiences differently, whether they are good (therapy) or bad (drugs, alcohol, etc) there's no reason to judge or shame her for her decision. One can only hope that she gets the proper help she needs in the near future.
(no subject) -

myharu 13th-Feb-2013 07:32 pm (UTC)
Although her reasons for becoming an av model is sad, I understand why someone who's been traumatized would have that sort of logic. I just hope she gets proper help. Also the entertainment industry needs some serious reform

liime_arix 13th-Feb-2013 07:38 pm (UTC)
This poor girl, I feel terrible that that happened to her. People have different ways of coping with what happened to them. Though I do worry for her going into the AV industry since it can negatively affect her. I hope she does get help though.

baka_tenshi 13th-Feb-2013 07:56 pm (UTC)
lol "evil custom" as though it was just some ~mistake~ that someone sexually assaulted her. fuck that noise.

oh i see we're already having some "BUT THAT'S NOT HOW YOU COPE WITH IT!!!" bullshit going on. anyway.

to be honest, i'm glad that she's taking charge of her sexuality like this and feels this is the best way to cope with it. that shows incredible strength on her part. ♥