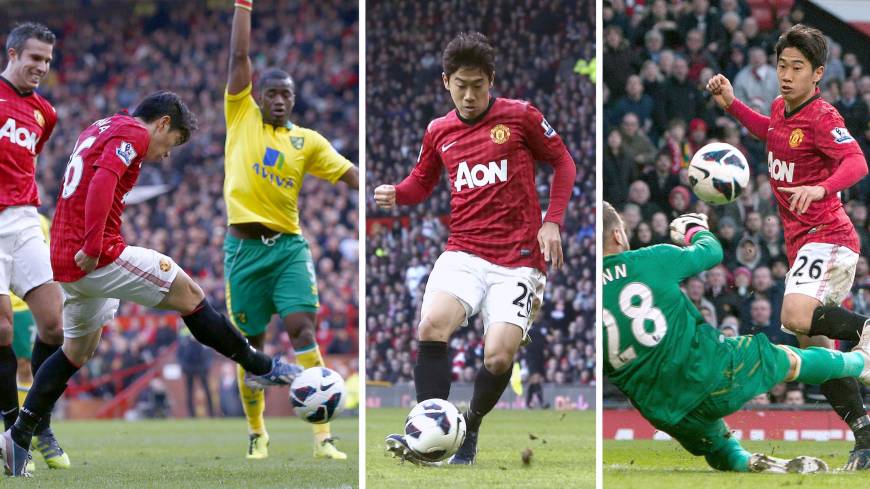 MANCHESTER, ENGLAND –
Manchester United fans arrived at Old Trafford ready to hail Ryan Giggs, but left with the name of another midfielder on their lips.

Shinji Kagawa made a strong start to his first season at United, but a knee injury sustained in a Champions League match in October kept the Japan international out for two months and left him scratching around for form.

He was back with a bang on Saturday.

Kagawa became the first Asian player to score a hat trick in the English Premier League as he guided the league leaders to a 4-0 win over Norwich.

“It was a brilliant day for him,” said United manager Alex Ferguson, who spent £12 million ($18 million) to bring Kagawa from German champion Borussia Dortmund in the offseason.

All three of the goals came from composed finishes, his first on the stroke of halftime a measured volley inside the near post to put United on its way. Kagawa then wrong-footed Norwich goalkeeper Mark Bunn in the 76th after running onto Rooney’s pass and he chipped Bunn to complete his hat trick three minutes from time.

The 23-year-old Kagawa had scored only twice for United before Saturday and Ferguson said he expects more from him next season.

“He is a good finisher,” Ferguson said. “His second goal was composed and intelligent, his last was brilliant.

“He missed that period of football in October and November that set him back a bit. He is gradually getting his form back but next year he will be far better, you will see a really good player then.”

Kagawa, speaking through an interpreter, admitted that, like most fans in Europe, his supporters in Japan will be more interested in events on Tuesday, when United hosts Real Madrid in the second leg of their Champions League last 16 tie, than this weekend.

“It will be a fantastic evening, of course, and I want to prepare and be in perfect condition to be able to help the team win. There are many things I have to do to help the team and that’s what I’m trying to do.”

United defender Rio Ferdinand, who didn’t play against Norwich, took to Twitter to praise Kagawa and his “2 silky feet.”

Giggs wasn’t even in the matchday squad on Saturday but will return against Madrid, where he will make his 1,000th senior competitive appearance, taking in club and country.

Source: Japantimes
I was so impressed with his second goal. It was not some flashy or powerful goal, but it was a goal that depicts excellent judgement and composure.