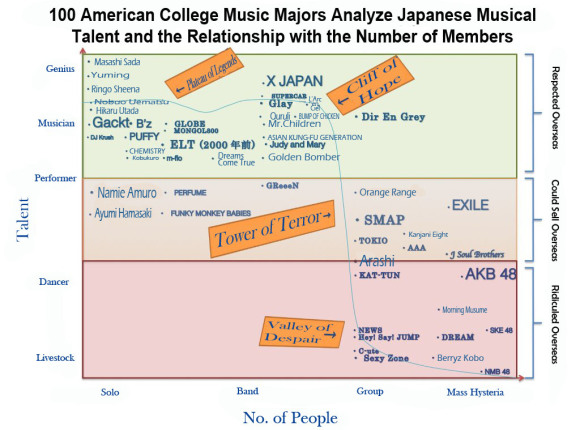 A chart surface on the Internet recently titled: 100 American College Music Majors Analyze Japanese Musical Talent and the Relationship with the Number of Members.


How exactly this information came together is unknown, but the name suggests that 100 American music students were surveyed about several Japanese music acts past and present. Those results were then plotted against the number of members in each band.


The results certainly do suggest that there is a correlation between the number of members in a music act and the perceived crappiness of said act. So lets examine this more deeply with some samples and a translated version of the chart above.


The chart is divided into three tiers; Respected Overseas, Could Sell Overseas, and Ridiculed Overseas. However, the results have been further classified into four distinct groups.


Plateau of Legends
This tier is made up of musical acts which mainly fall under the “genius” and “musician” labels. This plateau is also made up of solo acts or duets.


The highest ranking artist was Masashi Sada. After finding success with his partner in Grape, Sada broke out on his own and went on to continued success.

Although newer to the scene, Ringo Sheena has also earned a high ranking among these other giants.

Of course it’s not just singers. Turntables and orchestras are also in the mix with OG (literally) DJ Krush, and Final Fantasy composer Nobuo Uematsu.

This region is also full of highly valued artists but are made up of more people. Legendary visual rockers X Japan top this group.

I suppose the “hope” here is that a large number of musicians can work together and create quality music. However, watch your step, this next one’s a doozy!

The Tower of Terror
This region seems to a level of pop music purgatory where the lower echelons of solo artists and bands mingle with the finest of boy/girl bubblegum pop. Here we find hip-hop group Funky Monkey Babys. They were probably judged on their fluffy pop song, Arigatou.  Here they are getting a little more down with their bad selves.

And smack dab in the middle of the Tower are the icons of icons in J-Pop, the godfathers of making okay songs and promoting stuff – SMAP!  Exile, despite their excessively large number of back-up dancers, still made out well in this range.  Another one of mega-producer Johnny’s boy bands, Arashi is dangerously dangling on the edge of sort-of glory and…

The Valley of Despair

Herein lies the alleged talentless pool of entertainers and pretty faces judged by the survey as simply dancers or cattle. AKB48 barely slips below the threshold with their massive ensemble.

Also in the valley are groups who venture into somewhat creepy areas with the (too?) young Sexy Zone and Morning Musume.

Apparently there’s a lot of room in the valley due to the number of groups holding 48 members. However, the worst of the worst was deemed by this survey to be Osaka’s answer to AKB48, NMB48.

Of course, at the end of the day, music is entirely subjective. Aside from a few exceptions, there also seems to be a glaring case of “older-is-better” with these evaluations.


We should also note that RocketNews24 doesn’t necessarily share these opinions regarding music. In fact I have a picture of Sexy Zone tattooed on my back… I got in prison… good times.

on some of these evaluations..here for Nobuo Uematsu tbh ♥