One Piece's Oda Takes 1-Week Break Due to Illness 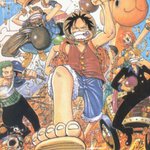 The editorial department for Shueisha's Weekly Shonen Jump magazine announced on Wednesday that the One Piece manga will be taking a week off because creator Eiichiro Oda has come down with a sudden illness.

This year's 16th issue of the magazine, which will ship on Monday, will not include One Piece. However, the editorial department was unable to make the correction in time, and so the manga will still be listed in the issue's table of contents. The staff apologized to readers, and added that the manga will return in the following issue on March 25.