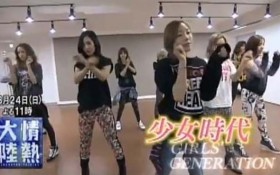 The mega-popular K-pop group Girls’ Generation (also known as SNSD and Shoujo Jidai) is set to become the first South Korean music act to appear on the Japanese reality/documentary TV program Jounetsu-Tairiku. The Japanese show films all kinds of different people, from Japanese celebrities to folks who are just plain interesting, for between 100 days to one full year, and then a TV special comprised of their lives during the period is broadcast.

The episode is scheduled to air on March 24th at 11:00 PM, and is said to feature footage of the nine-member girl group appearing on Korean music shows, practicing for their performances, as well as them on the road on their current tour across Japan. Girls’ Generation are one of the most popular music acts in Japan right now, recognized for crossing over the country from Korea and making it big before the “Korean wave” of entertainment exploded. And now they will be the first K-pop group to appear on the Japanese TV show, liked for revealing a more personal side of stars to their fans.

Girls’ Generation is currently on a nation-wide arena tour in Japan, meeting 200,000 of their fans. These fans can now look forward to the episode of Jounetsu-Tairiku where they can see not only the group’s dancing and flashy performances, but also the tears they shed and the personal moments they have throughout their everyday lives off the stage.