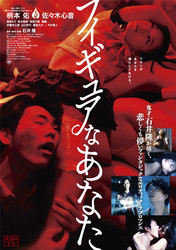 A trailer has been released for Takashi Ishii’s upcoming movie Hello, My Dolly Girlfriend (Figure na Anata). The trailer features clips from a love scene between co-stars Tasuku Emoto and Kokone Sasaki as well as an action fight scene with Sasaki’s character in a sailor suit.

The movie is based on a manga by Ishii called “Mukuchi na Anata”.

Emoto plays a lonely otaku named Kentaro who recently lost his job due to corporate restructuring. While drowning his sorrows in booze, he manages to pick a fight with a gang of thugs who chase him into an abandoned building. While barricading himself inside he discovers a pile of corpse-like mannequin parts stacked up in a large pile.

He soon discovers a life-sized female figurine on one of the piles which is dressed in a sailor suit. Kentaro investigates further and is shocked to discover she feels warm to the touch like a living girl. His excitement is short-lived, however, because the thugs finally manage to break in. Just then, the figure comes to life and single-handedly fends off the attackers.

Kentaro brings the girl home with him, but the next morning he wakes up to discover she’s become an inanimate figure again. Her name is “Kokone” (Kokone Sasaki) and the two of them will soon begin a bizarre life together.

“Hello, My Dolly Girlfriend” will be released by Kadokawa Pictures in Japan on June 15, 2013.