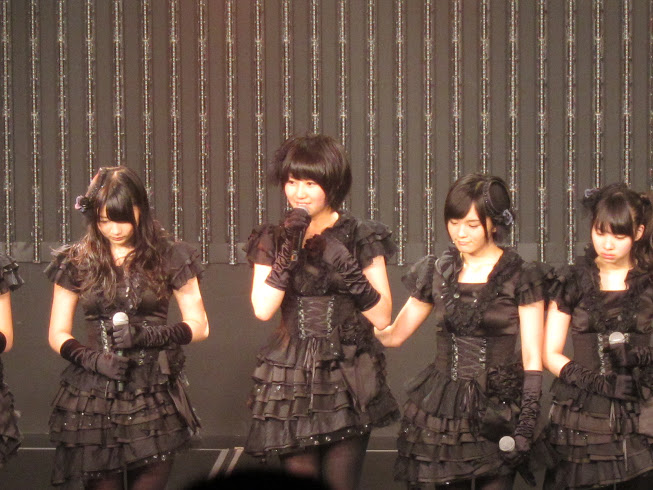 In her speech, she revealed her hardships of being one of the more unpopular members of the group.
She joined the group when she was 13.
Currently, she is 15 going on 16 this year.
All this time, she had to deal with fans who were not very kind to her who even went as far to say she didn't belong in NMB48 Team N, and there were others who deserved it more than her, and that she was bringing the rest of the team down.

Here is a full translation of her graduation announcement speech:

Shinohara Kanna's Speech:
"I, Shinohara Kanna will graduate from NMB48.
Although I started activities as a 1st generation NMB48 member when I was in my 1st year of junior high school, since little, I wasn't a person who can sing and dance in front on an audience, but I still had a dream to become a model.
When I was promoted to team N, I've experienced lot of fun times, happy times, sad times and difficult times. It was really a great experience.
Even though I was in senbatsu for Zetsumetsu Kurokami Shoujo, I wasn't chosen for senbatsu for the single releases after that, I didn't put enough hard work in, and couldn't show everyone my efforts, I'm very sorry.
After being put in team N, during handshake events, I've always been told, that I'm not fitting to be in N
Things like, "What are you in N for?" "There are others who should be in N rather than you" "Because of you, N is not moving forward"
It's really depressing, I kept wondering why was I promoted? It's really hard on me, but, even if people said things like that to me, I don't have any good point about me, I could only say, I'm sorry, but, now, I can say with confidence, that I'm really glad that I've been chosen to be in Team N.
To be able to make such great friends, travel around during concert tours, to be able to do stupid things, getting excited talking about silly things, to me it has been a really really great time, the happiest time, I'm really glad that I get to be in team N.
I, have graduated from junior high school. As a junior high graduate, I want to take a new step forward.
I want to start heading to my dream, to become a model, I want to start walking towards my goal.
Someday, somewhere, when the name 'Shinohara Kanna' appears, I want people to say 'Ah, it's Shinohara, I want to support her', I want that day to come true. I will do my best to make that day come true.
To those who have been saying "I love you", "I want to support you" up until now, I want to thank you so much.
Please continue to support me." 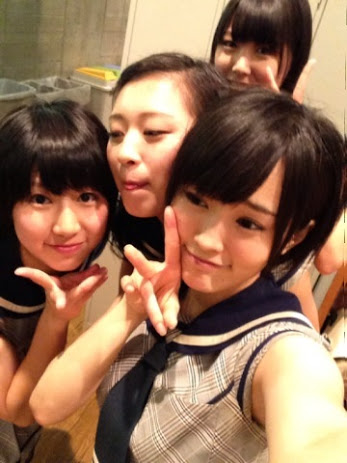 (Shinohara Kanna on the left of this picture)

In addition to that, NMB48 Captain Yamamoto Sayaka also had some words to say regarding Kanna's heartbreaking speech.
The translation is below:

Yamamoto Sayaka's Speech:
"It's a sudden announcement, I've said it many times before, NMB48 isn't the end point, whenever a new member joins in, whether be it Kanna, or Aina, we say what our dreams are, we become a part of NMB48, and are happy to be part of a group, we work hard so that we can work towards our dreams, that's why, to say something like that and graduate is something one can only do with confidence, and I think is something to be happy about.

However, Shinohara from the start, isn't someone who can take a lot of criticism, but, NONE OF THE MEMBERS EVER THOUGHT THAT 'WE DON'T NEED SHINOHARA' nor 'WE HAVE MEMBERS THAT WE DON'T NEED' nor 'SOMEONE IS DRAGGING US DOWN', WE NEVER THINK OF THESE KIND OF THINGS, BECAUSE THERE ISN'T ANY PERFECT PERSON IN THIS WORLD. For example, among the girls who chose NMB48 and entered NMB48, mainly, if there are girls who aren’t good at singing or dancing, there are also girls who find it difficult to speak, and more than being cute, there are girls who are better at being cool, and more than being cool there are also girls who are better at and like being cute.

I think that to gather everyone so that someone else has something that you don’t have to make up for areas that you lack is the meaning of belonging to a group.

Earlier, although we said that Kanna is noisy (during the MC), actually, it’s not only on stage, but also where fans can’t see it, there are many members who kindly give the other members energy, and make us able to smile.

So, really, even though it’s something that we all know, whether fans or members, there are lots of us who have been really supported by Kanna’s presence.  Please don’t forget that, and we hope that she won’t forget that and that she’ll progress on the road to achieving her dream to be a model.

Everyone, together with us, please support Kanna on her dream from now on too.  Please take care of her."
MY OWN RANT:
[Spoiler (click to open)]As a big fan of NMB48 Team N, this is so heartbreaking, and even irritating to read.
I seriously can't believe these fans to stoop so low to insult a 15-year-old, and say such hurtful things to her.
Yeah, I can get why she'll (Kanchiru) will want to leave because she was not getting to do much in NMB48 because she didn't shine as much as the others. She is also the most likely least popular member of Team N.
However, what the fans said to her was really uncalled for.
Sure she may not be your favourite or she may have been promoted in the past over some KKS that you may have liked better, but that doesn't mean you can just go up to a young 15-year-old and ruin her self confidence or even self esteem. She's 15, please give her a break. Perhaps when they began saying these things to her, she was even younger.
But once again, sasuga Captain Sayanee for her words. I'm so glad she addressed the issue straight on. I will never stop respecting that girl.
Either way, I wish Kanchiru all the best for her future. Hopefully, she'll able to reach her dream in becoming a model.
Tags: nmb48
Subscribe