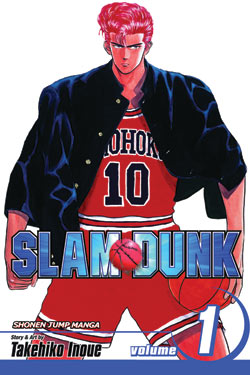 Stage play actor Osamu Kogure reported on his blog on Saturday that a live play of Takehiko Inoue's Slam Dunk manga is under consideration.

According to Kogure, the production would not be a "stage" play per se, since it would use a gymnasium instead of a traditional theater. The project would cast actors as well as top athletes through the Japan Basketball Association. The association's board of directors previously awarded Inoue a special commendation for his contribution to the growing popularity of basketball in Japan.

As proposed, the project would install a screen in the gym to play pictures of Slam Dunk scenes with a soundtrack using voice actors. It would also feature a live band playing an entirely new score.

Inoue's manga ran in Shueisha's Weekly Shonen Jump magazine from 1990 to 1996. The manga inspired an anime television series that ran from 1993 to 1996, as well as four anime films. The title has remained popular with fans hoping for a live-action adaptation. Viz publishes the Slam Dunk manga in North America.