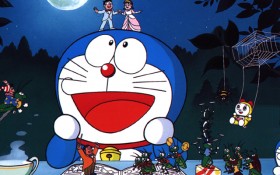 For the last 50 years, Godzilla has been an unstoppable movie monster in Japan, and not just in the literal sense, but in ticket sales too: the giant, iconic radioactive lizard has held the record of selling more than 99 million tickets to moviegoers over the series’ lifetime of 28 installments. But now there is a new number one, the cartoon robot cat Doraemon, arguably known by almost every single person in Japan (think similar to Micky Mouse in the West), is responsible for just over 100 million ticket sales in its 30-year history of movies.

Japan’s Toho Co., the movie production/distribution company responsible for both series, reveals that the dethroning took place sometime last week. Doraemon was first introduced to Japan in 1969 as a manga created by two artists working under the name Fujiko Fujio. The title character is a robot cat sent from the future wielding an unending number of magical tools that he keeps in a pocket in his tummy. Oh, and his ears were chewed off by mice. Kids across the country were quickly enthralled with the cat and his misadventures with sidekick Nobita, a young, underachieving, human boy, and his friends. The series was quickly adapted into a television cartoon, with movies not far behind. As so many Japanese hold Doraemon as a defining memory of their childhood, a change in voice actors in 2005 was met with great displeasure, mostly from adults who grew up watching the Saturday evening TV show.

Doraemon The Movie: Nobita in the Secret Gagets Museum is the latest film in the series, and having been released on March 9th, has already sold 1.9 million tickets. Doraemon movies are usually released by Toho every March in order to take place at the same time that children finish the Japanese school year. The series’ creators have admitted that it is difficult to keep the franchise based on children’s fascination with magic tools both alive and relevant in an age where most people have smartphones in their pockets. Doraemon director Kozo Kusuba commented in a 2005 interview with the Sankei Shimbun that the original story isn’t focused on the magic tools themselves, but rather the drama that is created when these extraordinary tools are introduced to ordinary situations. In order to help with that idea, modern technology marvels like cellphones and video game systems are banned from the world of Doraemon. With over 100 million tickets sold, its seems the magic is still there.