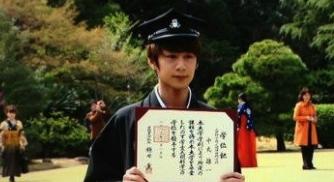 On March 26th, KAT-TUN member, Nakamaru Yuichi (29) graduated from Waseda University Faculty of Human Sciences. He enrolled in the said school in April 2008.

The graduation ceremony was held in Waseda University (campus located in Shinjuku, Tokyo) at 10:00am. Nakamaru attended wearing a crested kimono in order to get his diploma. “I only realized I was graduating until I received this. I was moved. To me, at the time, graduating seemed a little impossible since I entered university 6 years after graduating high school, I was happy with just attending back then”.

Over the past few weeks Nakamaru was rumored to be dating Katase Nana (31), after being spotted together at midnight by some weekly magazine. Nakamaru flatly denied dating her, he said they just happened to grab some dinner together. Nakamaru said with a smile “I, myself thought ‘majissuka?’ (Tsuichi’s catch-phrase). We just happened to had some dinner. I am so sorry for causing trouble to Ms. Katase. We are not dating”. In addition, “Katase is a woman I can rely one, a dependable older sister. When I arrived to the set Nakayama Hideyuki told me, ‘why didn’t you invite me instead?’”, causing laughter among the reporters.

Nakamaru is the first member of the agency to graduate from Waseda University. Over the past 5 years, he has learned about welfare and what the environment has to offer while balancing work and writing his thesis, a 37,000 characters letter based on the theme “Localization of dark music”, getting the highest grade, and A+.

During this ceremony 12,000 people also graduated. Since Nakamaru took classes online in his PC at work or home he did not get to attend the campus even once, he kept complaining, “I couldn’t make any friends”.