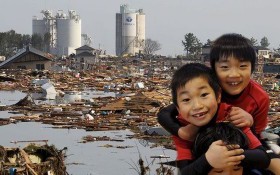 It has been two years since the Great East Japan Earthquake and tsunami hit northeastern Japan and caused the meltdown of the Fukushima nuclear power plant – the world’s worst nuclear disaster since Chernobyl. As the people begin to rebuild, signs of a cancer outbreak from the radiation of the troubled nuclear power station are beginning to show.

Two years after the meltdown in the reactors at Fukushima, the world has seemingly moved on. Officially, the mass evacuation of the areas around Fukushima was a success and the action of the workers at the plant may have averted a nuclear catastrophe. Authorities have insisted that no one has died as a result of radiation from Fukushima. There are, however, concerns that the full-scale of the disaster has yet to be seen. The most obvious – and immediately worrying – are results of tests carried out on more than 130,000 children who lived around Fukushima. Over 40 per cent of the children are showing early signs of thyroid cancer. Experts say that the other signs of the disease will not become apparent until 10 years after.

Questions are being asked as to how this happened. There are claims of complacency and a cover-up. While it is admirable and efficient that the people living very close to the nuclear plant were evacuated within the first few days, only time can tell if any damage may already have been done to their health. A bigger part of the population, some living up to 25 miles away, were not evacuated until six weeks after the radiation escaped. Also, it is quite possible that the food chain around the area has been contaminated. Radioactive material has been detected in all sorts of farm produce, including spinach, tea leaves, milk and beef, even as far as 200 miles away. According to Japan’s NHK, fish caught near the plant this month were over the radiation limits more than 5,000 times.

Currently, there is still a real daily risk of radiation escaping from the plant. The reactor is being cooled with huge amounts of water, but workers are running out of storage for the contaminated liquid once it has done its job. Even today, there is now pressure on the thousands of people who fled Fukushima to return to the area starting next month. These people who lived in outer areas have been told it’s safe to go home. Some of these people claim that authorities say they will not be eligible for any compensation if they stay away.

Experts are not able to agree on how serious the risks are, which adds to the confusion. One scientist says the radiation released was about 10 percent of the Chernobyl disaster, and another expert claims the true figure is closer to 40 percent. The government’s official position on radiation risks is based on the fact that very few Fukushima residents received doses over 100 millisieverts per year – which some studies show is the threshold for increased cancer risk. But other studies have shown that cancer can occur in much lower doses. “The potential effects of radiation from Fukushima have been shamelessly downplayed,” said Dr Rianne Teule, a radiation expert with Greenpeace. “It could be many years before we discover the real impact and some of the risks are being ignored.”