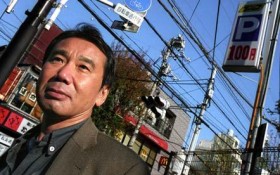 Bungei Shunju, the publisher for author Haruki Murakami’s latest novel, has said that internet pre-orders for his new work have set a new personal record, topping his previous work 1Q84, which was released three years ago. Scheduled for release in Japan on April 12th, the new novel, titled Shikisai or motanai to Tsukuru Tasaki, Kare Junrei no toshi no (“The faded Tsukuru Tasaki and year of his pilgrimage”), received over 10,000 reservations on Amazon.com in only 11 days.

To be honest, these numbers aren’t very impressive, especially for western countries, but it’s still a new record for the internationally adored author in his home country. Murakami’s last novel, the opus of 1Q84, was divided into three volumes for its release, with the first two only receiving 10,000 internet pre-orders over a three-week period. The third volume managed that amount in 12 days.

Due to Murakami’s devoted following in Japan, details about the releases of his books are always kept in secret, and this one has been no different. The April release date was only confirmed in mid-February of this year, while the title was only revealed in the last two weeks. Fans have little to no idea what the new story will be about, however the publisher has said it will be different from 1Q84, something becomes clear when the latest is only 376 pages long, as compared to the latter’s more than 1,000 pages. As a bestseller around the globe, Murakami’s 12 novels and collections of short stories and essays have been translated into 36 languages and sold 10 million copies in Japan alone. Publisher Bungei Shunju says to celebrate the new release, there will be a special countdown to a midnight sale on the night before held in one of the largest bookstores in Tokyo’s Shibuya district.