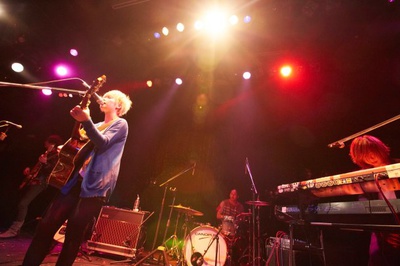 Singer/songwriter YUI (Bleach, Fullmetal Alchemist: Brotherhood) is returning to music as a a vocalist for the new band Flower Flower. The four-member band will make its formal debut at the Japan Jam event in Tokyo on May 4. The band will then play at the Tokyo Metropolitan Rock Festival 2013 on May 26. Flower Flower has launched an official website and Twitter account.

YUI formed the band with other musicians she respects, and the band started studio sessions earlier this year. Flower Flower has already been performing "secret" live events across Japan. YUI said that with Flower Flower, she is able to purely enjoy the music that the band creates, and from each new performance, she naturally gets new ideas for potential new songs.

YUI had announced in November that she would be taking a hiatus from music. She explained then that she wanted to try something new.

YUI has been performing music for eight years, and previously took a short hiatus from music from the end of 2008 to the middle of 2009. She performed the fifth ending theme for the Bleach anime, "Life," and the first opening theme for Fullmetal Alchemist: Brotherhood, "again." Her newest "YUI Best Albums," titled Green Garden Pop and Orange Garden Pop, were released in Japan on December 5.