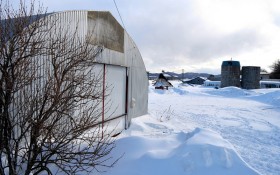 Mikio Okada, a 53-year-old father, was one of the fatalities in the blizzard that swept across Hokkaido on March 2nd. Okada, who made a living as a fisherman, got stranded in the snowfall as his truck ran out of fuel on the way home from an after-school play center with his nine-year old daughter, Natsune Okada. They had walked out to find shelter in vain, and as the father died protecting his daughter from the cold, she remembers him singing to her.

“I thought I was going to die,” Natsune, calm and composed, recalled during an interview. “I was prepared to die, and I went to sleep.” Their truck had run out of fuel at around 4:30 p.m., and Mikio had informed a relative that they would try walk to an acquaintance’s house 200 meters away. Walking in the snow, they reached a ranch storehouse, but the door was locked, and they couldn’t get in. Natsune remembers that her father had wrapped his jacket around her, and embraced her to keep her warm. That was when she recalled him singing, “Natchan wa ne, Natsune te iunda honto wa ne” (Natchan is not her real name. It’s really Natsune). Her father had his own version of the popular children’s song “Satchan,” and she recalled that her father would sing it whenever he’s had a drink.

Natsune said that hours into the blizzard, her father’s song became more erratic, and that was when she realized her father was getting weaker. The father and child were found on the morning of March 3, with Mikio still embracing his daughter, but the father had already died of the cold. Natsune was found alive and immediately taken to the hospital. The irony of it all, was that storehouse was only 70 meters away from the home of Mikio’s acquaintance, but visibility was close to non-existent in the blizzard. Natsune has since then received a huge number of encouraging letters and emails, as her story had reached the whole nation. “Please be proud of your father, the best in Japan,” said a particular message. “I was glad (to read the messages) even if I did not know any of the senders,” Natsune said. “I used to cry so easily that my mother told me, ‘Natsune, don’t cry so often.’ Now, I don’t cry so much,” she added.