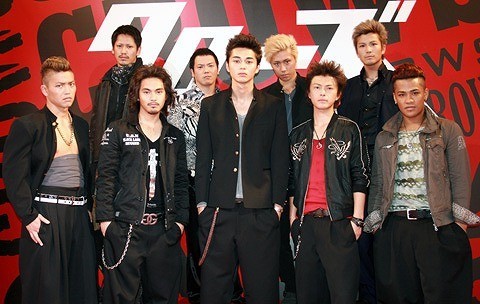 On Wednesday, an event was held in Tokyo to announce production of Toshiaki Toyoda’s Crows EXPLODE, the first live-action film based on Hiroshi Takahashi’s popular “Crows” manga in 4 years.

The new film will feature an almost entirely new staff and cast from its predecessors, Crows Zero (2007) and Crows Zero II (2009), both of which were directed by Takashi Miike.

Filming began on April 2. In an apparent reference to the new film’s diverse ensemble cast, who were in attendance in full costume, Toyoda compared the first two films to gyūdon (beef bowl) and the latest installment to sukiyaki (hot pot stew).

Once again the film is set at Suzuran High School, where delinquent boys constantly battle for supremacy and engage in gang wars with rival schools. Actor Masahiro Higashide was handpicked to play protagonist Kaburagi, a young man who transfers to Suzuran. Popular theater actor Taichi Saotome will play first-year student Ryohei Kagami, who aims to reach the top of Suzuran.

Ryo Katsuji is personal friends with the star of the previous two films, Shun Oguri, so he borrowed copies of the manga and sought out advice for his role.

Yuya Yagira will play Toru Goura, a student who’s currently closest to the “top” of Suzuran.

Other cast members include Takanori Iwata and ELLY of “Sandaime J Soul Brothers”, KENZO of DA PUMP, and Kento Nagayama.