The Legend of Zelda: A Link to the Past Followup Game Revealed 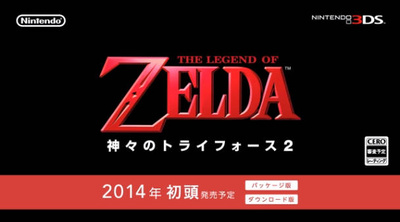 Nintendo announced a new game tied to its classic The Legend of Zelda: A Link to the Past game during its live-streamed Nintendo Direct conference on Wednesday. The North American stream of the conference did not give a formal title for the new game, but the Japanese stream listed the game as Zelda no Densetsu: Kamigami no Triforce 2 (The Legend of Zelda: The Triforce of the Gods 2). Zelda no Densetsu: Kamigami no Triforce was the original Japanese title of A Link to the Past.

The new game will be set in the same world as A Link to the Past, but it will take advantage of the 3D screen of the Nintendo 3DS to give players a better sense of a dungeon or maze's multiple levels in three dimensions. It will also let players put their hero Link in 2D "Paper" mode to slide along walls and around obstacles.

Nintendo listed an early 2014 release in stores and via download for the new game in Japan.