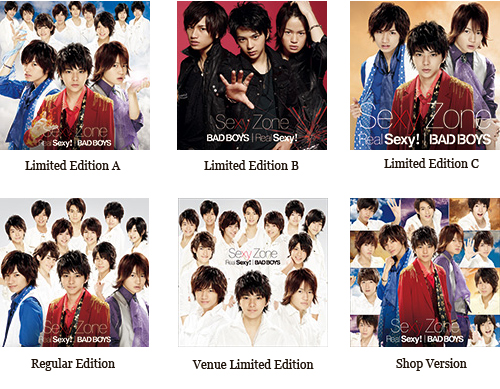 The said treatment inequality started last summer and with the recent jacket cover release, some fans who have made a reservation wanted to cancel after seeing the cover.

Sexy Zone’s upcoming single will be available in 6 editions (3 LE, 1 RE, 1 Venue LE, and 1 Shop Version). However, in those versions, Limited Edition B & C only has three members on the cover- Nakajima Kento, Sato Shori, and Kikuchi Fuma. While in the other versions, the three are obviously placed in the center while fellow members, Marius Yo and Matsushima Sou, were relegated at the background together with the featured Johnny’s Jrs.

Even though this is Sexy Zone’s single, not one jacket cover has the 5 members only. Moreover, Nakajima, Shori, and Kikuchi got more exposure for BAD BOYS while Marius and Matsushima were made to blend with the rest of the Juniors.

“I know that Johnny wants to put the juniors in the market but I really don’t understand what the office is doing,” according to one Sexy Zone female fan.

While the Juniors exposure may delight some fans, fans of Marius and Matsushima aren’t particularly pleased. Moreover, Matsushima’s absence during Sexy Zone’s 1st day of National Tour last Mar 26th became a hot topic and no explanation was given by the office.

Fans could only hope that Sexy Zone will continue their activities this year with all 5 members.