This concert features individual performances by AKB48, SKE48, NMB48 and HKT48 at the Budokan with a combined performance on April 28th. Following SKE48 on Day 1, NMB48 took the stage to a crowd of roughly 11,000 fans, performing a setlist that could only be characterized as NMB-like.

With Watanabe Miyuki as the backstage announcer, NMB48’s version of the Overture began to play, with the center of the stage illuminating the presence of the NMB48 members. With Kinoshita Haruna’s and Kadowaki Kanako’s mystery quiz, the group lead off with “Nandeyanen, Idol”, “NMB48” and “Seishun no Laptime”, invigorating the crowd.

Following the third song, the members took center stage to greet the crowd. Yamamoto Sayaka said, “What an amazing crowd.” while Milky states “Tanoshimirukii!”. Newcomer Yokoyama Yui stated “There is something we wish to say with you all”, to which the crowd and members yelled together “Teppen Tottande!!!”

As the MC ended, Watanabe Miyuki lead off with her solo song, “Warukii”, followed by Yamamoto, Yokoyama and Yamada’s “Dazai Osamu wo yonda kai?” and other red and white group songs.

Yamamoto’s solo song “Jungle Gym” was hindered by technical issues that lead to a slight delay where Yamamoto said, “My partner isn’t listening to me”. She also commented on how the penlights made the stadium vibrant, and as she finished her solo song, she was met with a deafening applause.

Yamada Nana’s MC followed, reflecting upon (April 18th’s) NMB48’s Request Hour Best 30. Yamamoto Sayaka mentioned “I was so nervous because I was being observed from 360 degrees”. 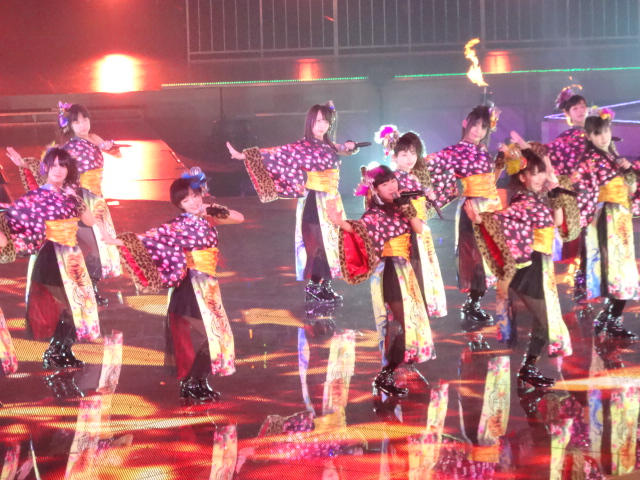 
The second half of the performance started off with Team BII’s “Almond Croissant Keikaku” along with respective team songs from Team N and M. N performed “Mousou Girlfriend” sporting the original uniforms from the PVs, complete with the cat ears.

Next followed the senbatsu member focused singles, featuring “Zetsumetsu Kurokami Shoujo”, “Virginity”, “Nagiichi” and “Kitagawa Kenji”. Later, Yamamoto stated “We are aiming to appear on NHK’s year end Kouhaku Uta Gassen. Taking this Nippon Budokan as confidence, we hope to move towards our dream” and ended with a performance of “１２月３１日”.

For the encore the members arrived in t-shirts and shorts, with Yamada Nana announcing the release of their 7th single. Stating “We now want to perform a coupling song from the single” and proceeded to perform Geinin 2’s theme song, “Todokanasomonode Todokumono”.

Responding to the crowd’s “Ainyan call”, Fukumoto stated, “Even before NMB48, I had always wanted to be a variety talent. After joining NMB48 and receiving the opportunity to stand upon different stages and experience different things, my feelings regarding my dream as a talento strengthened and lead me to graduate. Graduating the up-coming NMB48 was something that was hard, but just as they are going for the teppen (top), I am going to go for the teppen of the variety world!”.

With that being said, the theme song for the Yoshimoto Shinkigeki began to play, and out came Ikeno Medaka, Kendo Kobayashi, Jinnai Tomonori and Tamura Kenji, fellow comedians that had spent a long time with Fukumoto. The four of them rushed to see NMB48 performed, and gave words of encouragement for Ainyan.


As she stated, “Thank you for this wonderful graduation”, she slowly began to walk off stage, falling into a trap hole in the stage filled with flour. As Jinnai asked how she felt, she responded with “Oh my god!” leading to their final number, “Oh My God”. The white flour covered Fukumoto danced the whole number with the group and eventually greeted and thanked the fans, mixing tears with hope and laughter, the NMB48 concert came to a close.


P.S. Fukumoto Aina/Ainyan didn't actually graduate at  the Budoukan yesterday.
She is still set to fully graduate from NMB in June.
And I was following this as it happened on Twitter, and I actually believed it!! pfffts.
They made it really seem like it was her final day with NMB there. My hearttttt!!!
I got trolled by NMB48. Only they would do this seriously.
Sasuga NMB48, the geinin group of trolls.
So fitting to end the night with Oh My God! though and I'm happy for all the Ainyan love <3

More photos before Aina's baptism and after: 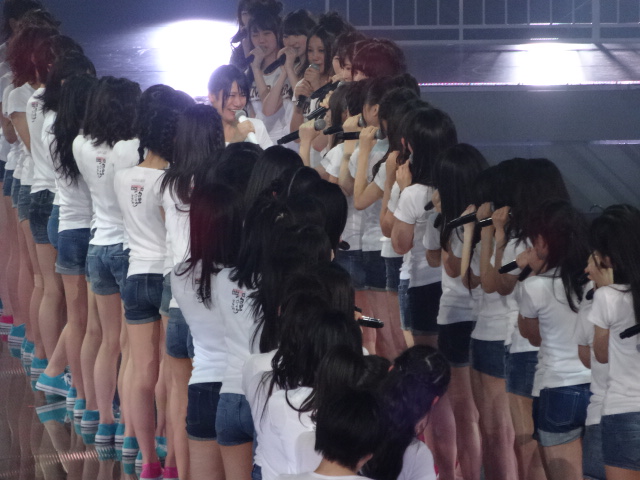 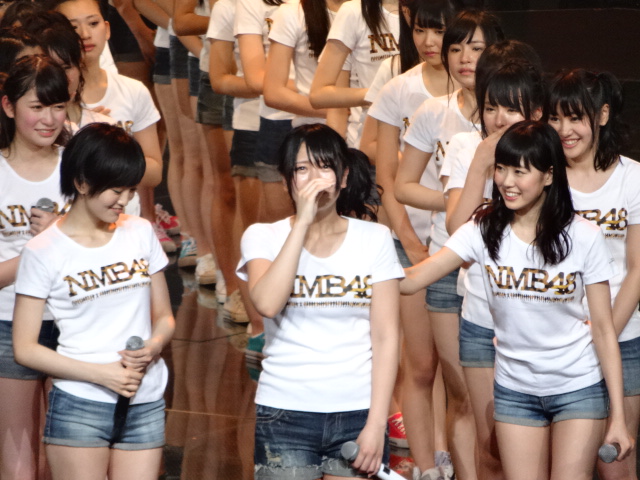 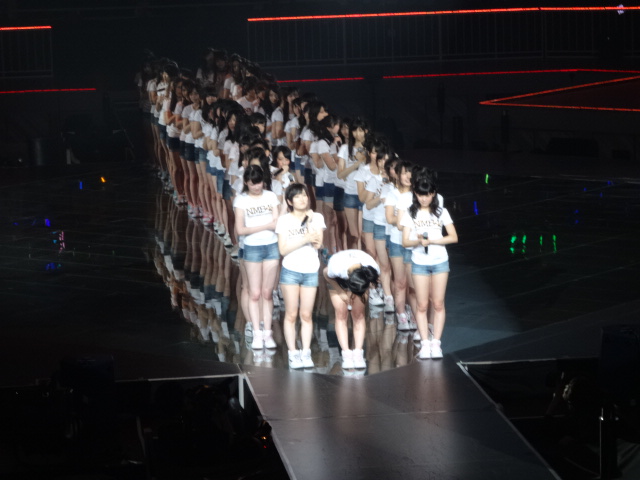 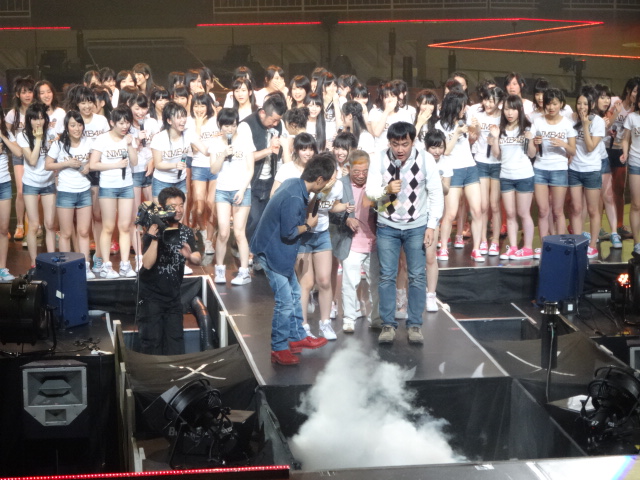 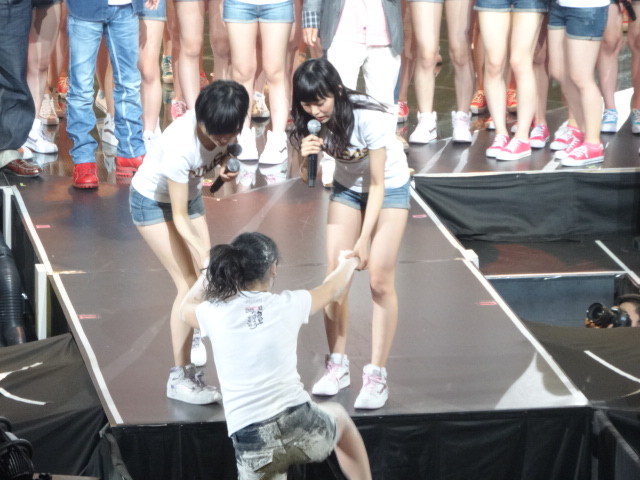 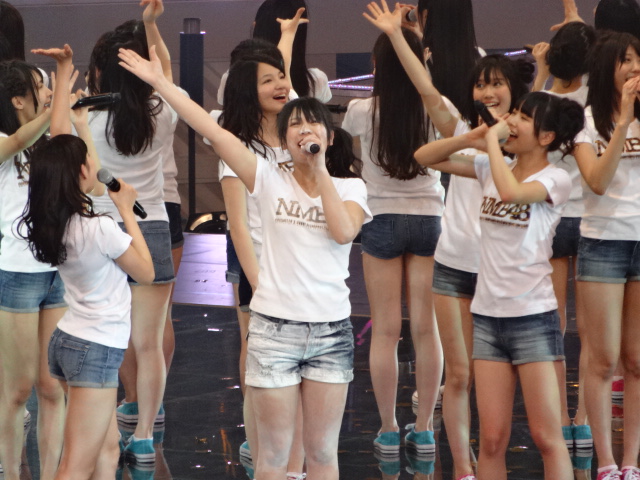