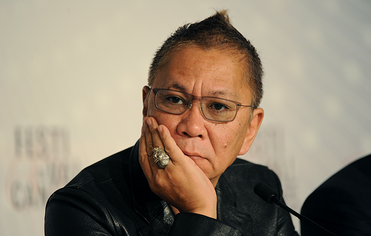 A blood-soaked vengeance tale from Japan drew the biggest boos in the race for the Cannes Film Festival’s top prize Monday, with critics savaging a “risible” parade of cliches.

Japanese director Takashi Miike unveiled “Shield of Straw” (Wara No Tate) about a nationwide bounty hunt for a child rapist who murders the seven-year-old granddaughter of a billionaire politician.

The man offers a 1 billion yen reward for the criminal’s capture and killing. The offer touches off a frenzy in the country, sending hordes of would-be vigilantes on the chase for the murderer.

Fearing for his life, the killer turns himself in and a team of cops—a widower whose wife was killed by a drunk driver and a single mother—see it as their duty to protect him at all costs despite his crimes.

But they must fend off all manner of armed assailants—some driven by greed for the reward and others, crime victims themselves who feel let down by the system, by a desire for a delayed sense of justice.

The picture, one of 20 vying for the Palme d’Or award, got off to a promising start with impromptu applause for a spectacular ambush scene executed with military precision.

But reviewers said the film went off the rails during a bullet train scene in which the cops deliver long speeches about their personal motivations and reflections on the moral quandary they face over risking their lives to guard a remorseless killer, only pausing to brutally dispatch blood-thirsty bounty-hunters.

Movie magazine CineVue posted a review within minutes giving the picture one star out of five and calling it a “stone-cold dud” while cult film watcher Electric Sheep said it went “down like a lead balloon.”

The Irish Times reviewer, however, had a few kind words for the “classy action sequences” and predicted a big-budget Hollywood remake.

“Few action movies have been so dedicated to the cause of liberal democracy and trial by jury. ‘Shield of Straw’ is the anti-Dirty Harry,” it wrote, referring to the iconic Clint Eastwood franchise.

Miike, a remarkably prolific director whose work has been banned in some countries for excessive gore, lamented that the Japanese cinema industry was turning its back on what he called a proud tradition of blockbuster action movies.

“It’s not the viewers who don’t want to see these films, it’s the professionals, the people who make films,” he told reporters.

“Some of the scenes, particularly the high-speed train, we weren’t able to make in Japan so we did them in Taiwan,” he said, noting that Japanese authorities had objected on security grounds.

Miike admitted that his film was unlikely to capture the top prize when jury president Steven Spielberg announces the winner Sunday.

“I don’t really think that this is a film that’s made for the Palme d’Or but I’m happy a different class of film has been allowed in the official competition,” he said. “If the film can stimulate audiences I’d be delighted.”

A Japanese film has not won at Cannes since “The Eel” by Shohei Imamura in 1997, which was joint winner with Iranian director Abbas Kiarostami’s Taste of Cherry.